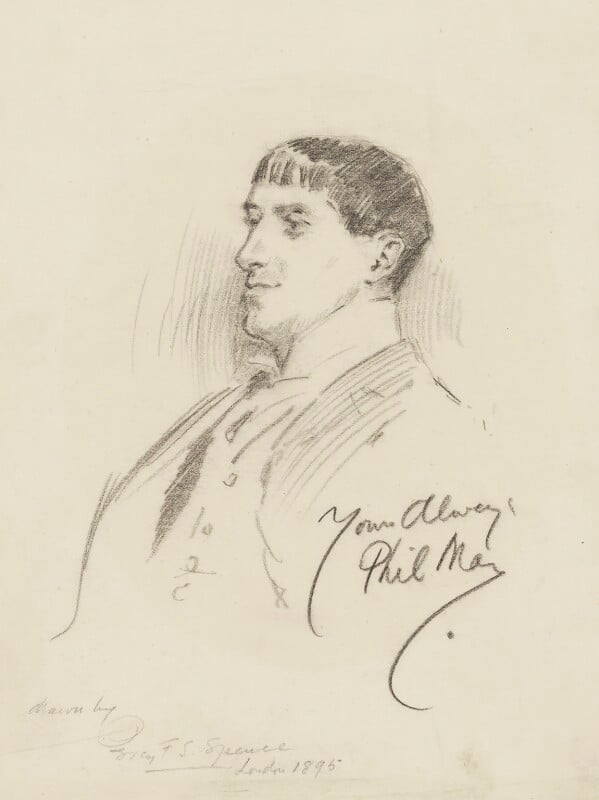 Percy Seaton Frederick Spence grew up in Fiji, the son of an Australian magistrate.[1]

Mr Spence never had a drawing-lesson in his life. He lived in Figi [sic] from the age of seven to nineteen, and drew by the prompting of nature every thing he saw. The natives used to be much interested in his work; they used to call him the Mad Boy, because they thought drawing was a kind of uncanny possession. 1)

He moved to Sydney in the late 1880s ‘to make his way as an Artist – with no qualifications except natural ability, no training, no money, and no one who could have helped him in his chosen proffession [sic]’ before going to London in 1895 where he contributed drawings to the Graphic, the Illustrated London News, Punch and other illustrated magazines. Phil May, freshly returned from Sydney himself, would have been one of his first contacts on arrival. ‘[My father] specialized in rapid portrait drawings – threw off large oil paintings – posters, anything at all,’ wrote Spence’s daughter. ‘These were the days before photography [sic] and in his capacity as correspondent he followed all functions in London doing what today would be done by photographers.’ He and May were apparently ‘great cronies’. [2]

Spence has given May a filled-out, rather prosperous look which is at variance with the rest of his iconography of the mid-1890s.

The drawing, perforated at one side, has been removed from a sketchbook. It is the same format as Spence’s portrait of Robert Louis Stevenson (NPG 1184). Originally both had been part of a sketchbook of theatrical subjects (NPG D23134) that Spence sold to the National Portrait Gallery for the nominal sum of £5 – a transaction he later regretted. [3] As May was a living subject in 1899, the date of the acquisition, the Gallery’s ten-year rule precluded immediate accession of the portrait. [4] The drawing is autographed by May.