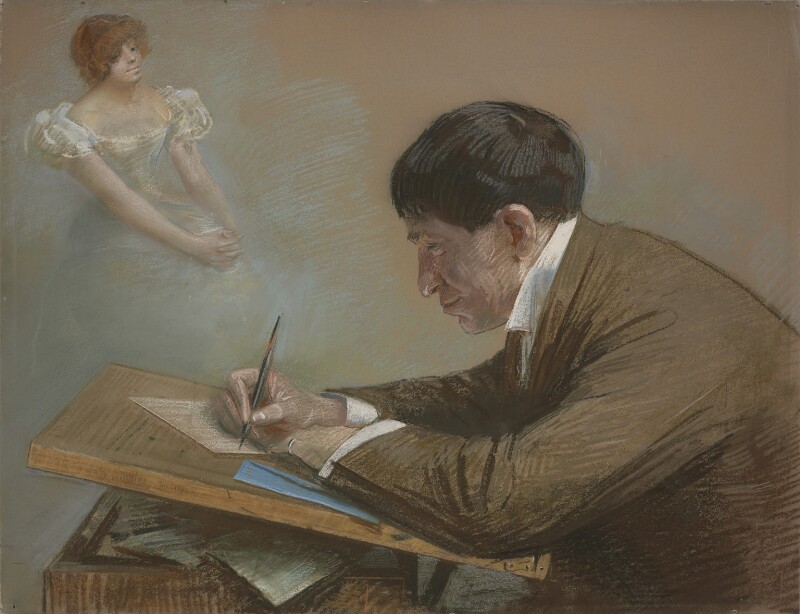 Robert Ponsonby Staples, Northern Irish portrait, genre and landscape painter, worked in England from the mid-1870s to c.1904. In 1897 he was the art master at the People’s Palace, Mile End Road, a progressive educational institution in the East End of London. [1] Staples’s links with Phil May in the 1890s could have been through the Savage Club, to which both artists belonged. R.P. Staples is the author of four portraits at the National Portrait Gallery, of which this was the earliest to be acquired.

The figure of May is strongly drawn, with strategic touches of blue to lift the composition. The friendly, voluptuous young woman in the top left-hand corner is more faintly drawn.

The drawing was presented to the Gallery in 1912 by Mr Ernest E. Leggatt of 62 Cheapside. [2] In 1924 there was some correspondence between the Gallery and Staples over copyright issues, but no information was provided as to the circumstances of the portrait. In 1913, £1.1s.6d. was spent on altering a large and ornate frame to fit the drawing. [3]

Half-length, seated, profile to left, bent over drawing board, with ?stylus in right hand; top left, figure of a woman with hands clasped around knees.