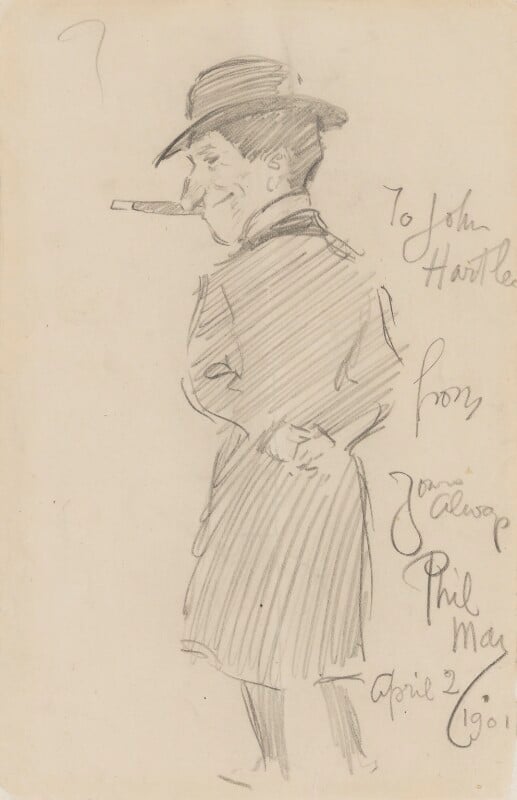 Nothing is known about John ?Hartley to whom Phil May dedicated this drawing in 1901. It is an example of the classic May self-parody – a leery profile, cigar clamped in jaw – signed and dedicated with a flourish. [1]

There were dozens in circulation. Phil May was a famous, very recognizable figure and the sketches had instant currency; they were scattered, changed hands, treasured or perished. Some of them eventually found their way into public collections: quickly in the case of Bradford City Art Gallery – a pair of undated pencil sketches were acquired in 1905 (1905-1, 1905-2); in the case of the National Portrait Gallery the earliest self-portrait caricature entered the collection in 1934 (see NPG 2661).

A variation on the profile type appeared from about 1895 when May was elected to the staff of Punch; from then on he might give himself a Mr Punch profile, as on the invitation card for the Phil May memorial exhibition at the Leicester Galleries, 1903 (repr. Cuppleditch 1981, p.53); or he drew himself dressed, painted and acting as a jester (e.g., the vignettes, colophons, and end papers, Phil May Folio 1904, copy NPG Archive). [2]

Another variant is a figure that sits between caricature and portraiture, where May used himself (drawn fairly straight) as the artist-type in a comical situation. There are examples of these milder caricatures in the pages of the illustrated magazines (e.g., St Stephen’s Review, Punch, the Sketch), and in the May annuals that appeared from 1892 to 1905. [3] See also the undated drawing of himself (Leeds CAG, LEEAG.PA.1964.0002.0003) in a character part (Pistol in Henry V).

Marion Harry Spielmann in his History of Punch (1895) made the point that May was not, within the profession, a true caricaturist:

[Mr May] cannot be called a caricaturist, for in his work there lacks that fierce quality of critical conception – above all, that subject-matter that makes one think, that sardonic appeal to head and heart at once, which make up the sum of true caricature […] He is neither a politician nor a reformer, nor even, if properly understood, a satirist. His aim is to show men and things as they really are, seen through a curtain of fun and raillery – not as they might or ought to be. [4]

1) ‘Any collector of May drawings will have encountered scores of hastily drawn self-portraits, the fringe, the cigar, the aimiable grin, filling up the space of menu cards, invitations and autograph albums’; Houfe 2002, p.xi. In the 1980s a number of May self-portrait sketches appeared in the London salerooms (Christie’s, South Kensington and Phillips, not ill.), and at the dealers Abbott & Holder. See also Christie’s, 7 Mar. 1978 (120, 121); and Chris Beetles and other specialist dealers.
2) See the Punch Archive at the BL, London for further possible self-portraits.
3) However, for The Parson and the Painter (serialized in St Stephen’s Review, 1889–91, publ. as a book 1891) May did not use himself as a model for the fictional protagonist ‘Charlie Summers’.
4) Spielmann 1895a, p.569.

Whole-length, back view, head profile to left with cigar and hat, hands clasped.