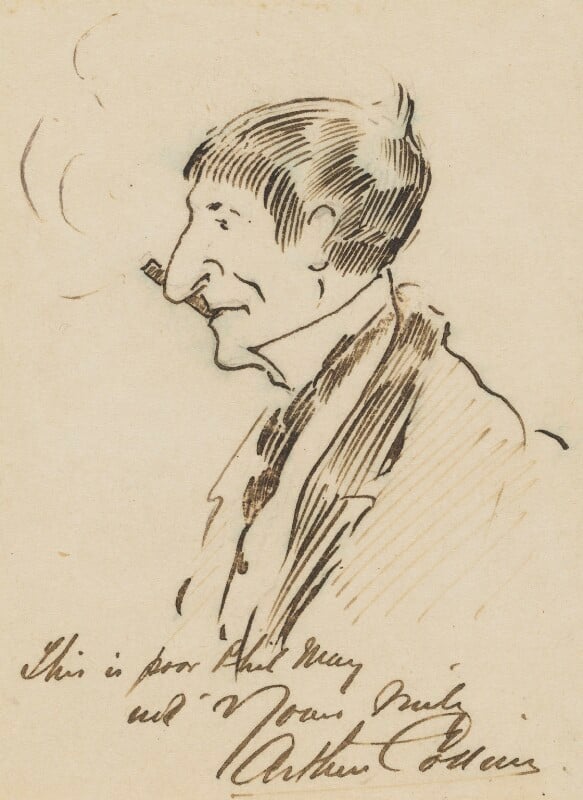 Arthur Pelham Collins originally trained with Henry Emden, scene painter at the Drury Lane Theatre; he rose to become stage manager and eventually the highly successful managing director of the theatre from 1897 to 1924. [1] He and May were regular diners at Romano’s restaurant and the café Vaudeville in the Strand. [2] The sketch is apparently inscribed ‘This is poor Phil May / [?]not Yours truly / Arthur Collins’. [3] It is undated but probably shows May towards the end of his life, about 1900–3.

The sketch was initally offered to the National Portrait Gallery by Rathmell Wilson in 1934. It was part of ‘a collection of small cards framed together’, [4] comprising sketches of different figures of the arts and entertainment worlds. Included were four portraits (of May, Caruso, Bransby Williams and Dan Leno (George Wild Galvin)) by various artists. In 1935 the collection was broken up and the drawings separately mounted to allow the NPG to accept three of the portraits, of May, Williams (NPG 2750a) and Dan Leno (NPG 2750).

1) Who’s Who in the Theatre, 1912; and Who Was Who 1967, p.274. Collins listed ‘painting’ as one of his hobbies.
2) ‘May had ensconced himself in one of the two little windowed recesses beside the stairs on the mezzanine floor at Romano’s which gave a view of the street, in order to make sketches of the crowd and any incident that might occur’; Thorpe 1932, p.55.
3) See also the inscription cut from the paper at the back of an associated sketch of Dan Leno (NPG 2750), in 1934 (now in Primary Collection Associated Items plan chest, NPG Archive): ‘Caruso – drawn by himself. / Phil May – drawn by Arthur Collins. / Bransby Williams – drawn by himself. / Sketch by Charles A Buchel. / Dan Leno drawn by himself. / Sketch by Walter Crane. / Sketch by Mortimer Menpes. / Sketch by Hassall / Sketch by Dudley Hardy.’
4) Letter from R. Wilson to the Secretary, NPG, 30 June 1934. Rathmell Wilson, ?American-born author: his novel When Love Dies was the basis for the film Eve’s Daughter (1916); also the author of All Sorts: A Literary Review (1924) and The Wandering Gentile’s Log Book (1929–31). See note 1 for the other named sketches in Wilson’s collection.