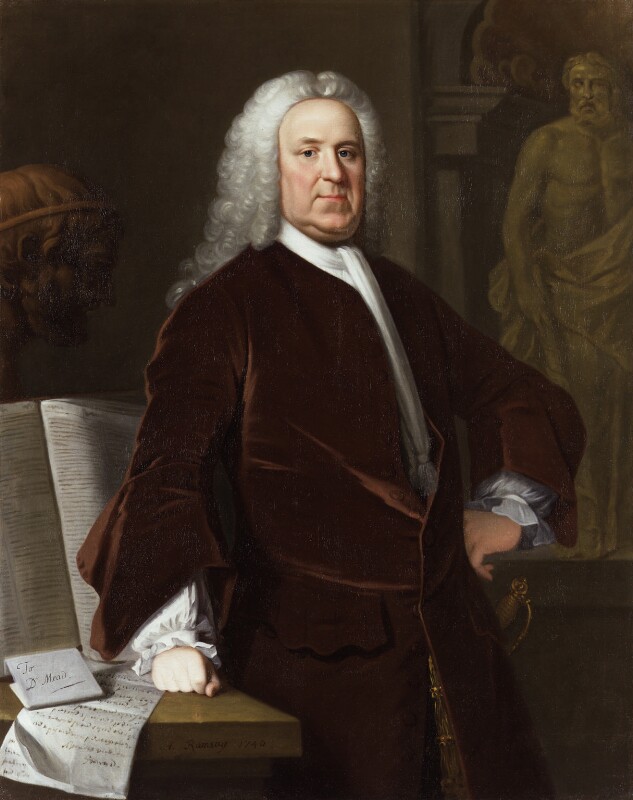 Inscribed beside the letter, right: A. Ramsay 1740.

Despite the inscription or signature, and the resemblance to the fine full length in the Foundling Hospital inscribed Painted and Given by Ramsay 1747 [1], the quality of NPG 15 poses a problem of authorship. The inflexible handling is not unknown in Ramsay's early work, as for example in his portrait of Grant signed and dated 1739; [2] NPG 15 may, however, be from his studio [3] rather than autograph. In both portraits an envelope is shown addressed To/Dr Mead. In the Foundling Hospital painting the statue is of Hygieia, goddess of health; [4] the classical figure of Aesculapius in NPG 15 is from no recognisable model. [5] The bust behind the sitter's right shoulder, previously believed to be the bronze known as Homer or Pindar [6] but now identified as Sophocles, [7] is very like the head acquired by Mead in 1720 from Tart House, the London home of the Earl of Arundel's widow. [8] The Mead bust was purchased at his sale, Langford's, 13 January 1755, by the Earl of Exeter who presented it to the British Museum in 1760.
A version of NPG 15, perhaps earlier and with differences in the right hand, was presented c.1747-50 to the Society of Apothecaries by Dr Lancelot Burton Jackson. Another, 30 x 25 in., possibly a copy, now in the Bodleian Library, was given to the University by Swithin Adee, MD (d. 1786) of Corpus Christi. [9]

Surface cleaned, varnished three times and lined between 1857 and 1902.

Bought, 1857, from George Greenland of Anerly.