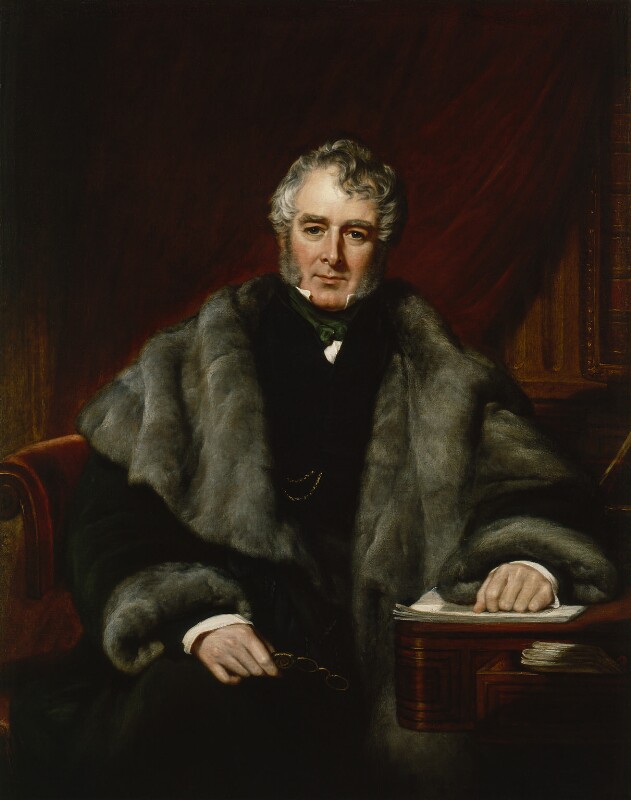 Inscribed on a damaged piece of paper, originally on the stretcher: ... [torn] 1877/Lord Melbourne over chimney piece/Library ... [torn]/Portrait by Partridge I/was glad to obtain the picture/of my old master on the sale/that took place on the Artists/death./A very good likeness C. Howard

Behind Melbourne on the right is a leather-bound volume of state papers. Like Partridge's portraits of Lord Aberdeen (NPG 750), Lord Macaulay (NPG 1564), and Lord Palmerston (NPG 1025), this portrait is closely related to the figure of Melbourne in Partridge's group, 'The Fine Arts Commissioners' (NPG 342), and was presumably painted as a finished study for it. Partridge painted most of the Commissioners individually between 1844 and 1849, and retained these portraits. After his refusal to exhibit any further pictures at the Royal Academy after 1846, he exhibited many of these portraits at his own Gallery. At his death in 1872, his executors attempted to sell them to the original sitters or their descendants, and auctioned the remainder at Christie's, 15 June 1874. In the catalogue of the SKM exhibition, the portrait of Lord Melbourne is said to have been lent by Viscountess Palmerston. This appears to have been a printing error. Viscountess Palmerston lent another portrait of Melbourne by Lawrence (315) to the same exhibition, but there is no record of her or her descendants ever having owned a portrait of Melbourne by Partridge. The Partridge portrait in that exhibition (a photograph of it exists) is identical to the NPG portrait and the sizes are similar. Partridge lent several other studies for 'The Fine Arts Commissioners' to the exhibition, and it seems more than likely that it was he who lent the Melbourne. There is no record of Partridge or his executors disposing of any studies for 'The Fine Arts Commissioners' before 1872, nor is there a record of a second study similar to the NPG portrait.
In his two MS notebooks, listing pictures in his possession in 1863 and 1870, Partridge dates this portrait 1844. This apparently contradicts the evidence of a letter written by Melbourne to Partridge, dated 8 November 1848 (NPG archives), in which he agrees to sit for his portrait, but the letter may refer to a sitting for the finished picture of 'The Fine Arts Commissioners', rather than for this study. In any case, the head in the NPG portrait is almost identical with the head of Melbourne in a portrait by Partridge commissioned by Queen Victoria in 1844 (Royal Collection), reproduced Lord D. Cecil, Lord M. (1954), facing p 314, although the clothes, pose and accessories are different. This would argue in favour of 1844 rather than 1848 as the date of the NPG portrait. Another version of the Royal Collection portrait type was in the collection of Lord Brocket, ex-collections of Earl Cowper [1] and Lady Desborough, sold Christie's, 16 October 1953 (lot III). It is listed in Partridge's two MS notebooks and dated 1843. [2] A copy of the NPG portrait by A. Dyer is at Hertford County Hall.
In the past the date 1846 has been given to all Partridge's portraits of 'The Fine Arts Commissioners', and to the finished group, presumably because this was the date of the meeting depicted. It is clear, however, from contemporary documents, that the big picture was still unfinished in 1853.
Although Charles Howard purchased this portrait from Partridge's executors, he declined to buy the portrait of his brother, the 7th Earl of Carlisle, sold Christie's, 15 June 1874 (lot 73), or of his brother-in-law, the 2nd Duke of Sutherland (collection of the present Duke of Sutherland).

1) Four letters from Earl Cowper to Sir John Clarke concerning the purchase of the portrait from the Partridge estate (NPG archives).
2) Various portraits of Melbourne, presumably other versions of the Royal Collection type, are listed in Partridge's 'Sitters Book' (NPG archives); under 1844, commissioned by Edward Anson; 1845, by J. Young; and 1848, by the Hon Caroline Norton, and a second by Miss Gayler(?).

Blue eyes, grey hair. Dressed in green stock, white shirt, dark suit with silver fob-chain, and green peer's robes with grey fur. Seated on a red-covered wooden chair with his hand resting on papers on a library table. Red curtain behind at left and centre, brown wooden panelling at right. Holding a pair of gold spectacles.

The artist; bought from his executors by the Hon Charles Howard, 18731; presented by his son, the 9th Earl of Carlisle, 1893.