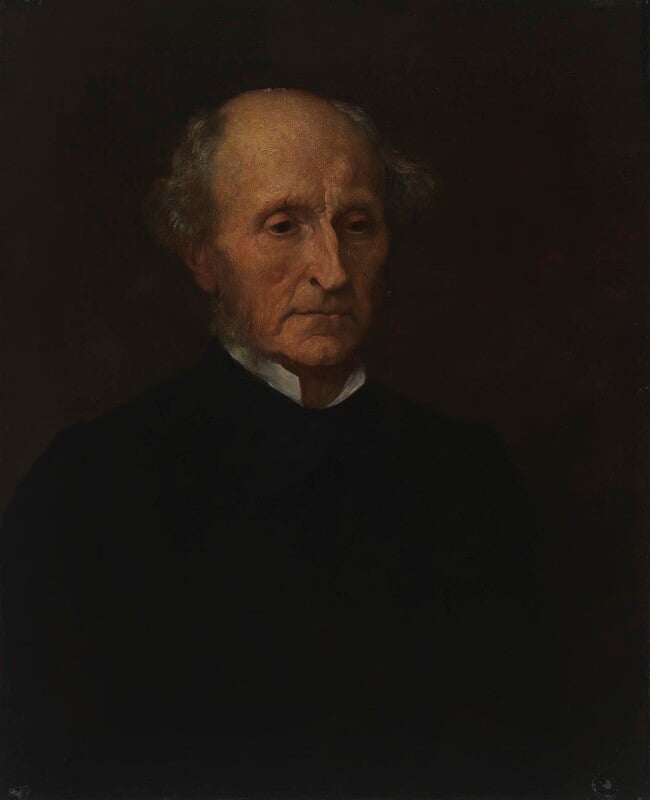 'I hardly know how to answer your very kind and flattering proposal regarding a portrait. I have hitherto disliked having my portrait taken, but I am unwilling to refuse the high compliment paid me by Mr. Watts and yourself; and if sittings can be arranged within the limited time of my stay in London I shall be happy to make an appointment.'
Watts recorded one sitting in a letter to Duke of 16 March 1873 (Westminster archives): 'Mr Mill is to come tomorrow to give me a sitting.' In her catalogue, Mrs Watts mentions a letter from Mill to Watts promising a sitting on 17 March. According to Mrs Watts, during the sittings Mr and Mrs Fawcett came to see the portrait, and felt that Watts had 'seized that characteristic of Mill which gave the impression of his great refinement and delicacy'. Watts found Mill a sympathetic sitter 'sensitive to all that was beautiful inform and poetic in thought'. Mill died on 8 May 1873. On 3 August Watts wrote to Dilke (Westminster archives):

'Losing so much time in the Spring by being ill I am a good deal in arrears with my work but I hope to have my copy finished by the middle of the week. Perhaps if not inconvenient you and Lady Dilke would pay my studio a visit about Wednesday afternoon or any other afternoon after 6. You might like to see the picture and the replica together as I am not sure the latter is not the best of the two.'
The replica mentioned in this letter is the portrait now in the NPG; Dilke preferred to keep the original, and he was wise to do so, as it is a much stronger and more vital characterization. Watts wrote to Dilke again on 2 September 1873 (Westminster archives):

'I regret to say I forgot to make the memorandum on the portrait of Mr Mill to the effect that it was the first painted but that can be done at any time.
I beg to acknowledge your cheque for £315, payment for the portrait...
If you wish to keep the frame its price is 5 gns.'
Over the question of an engraver, there was quite a considerable correspondence between Watts and Dilke, before Rajon was selected; the latter wrote to Dilke in French on 4 July 1874 to say that the etching was 'déjà très avancé' (Westminster archives). Watts thought the finished etching excellent.
Dilke's portrait was the only one done by Watts from the life. When Dilke discovered that Mill's stepdaughter, Helen Taylor, who had urged Mill to sit to Watts, did not possess any portrait of Mill herself, he offered her his own. In a letter of 20 November 1873 to Lady Dilke, she declined the offer (Westminster archives): 'no-one has a better right to the portrait of my dear step-father than you and Sir Charles Dilke ... It was meant for you; and that, to me gives you a right to it which is sacred.' She wished to have a replica painted to present to the nation, but discovered that Watts had already painted the NPG portrait for this purpose.
In 1905 a third version of the portrait was lent to the Watts Memorial Exhibition, Royal Academy (34), by the executors of the painter, catalogued as if it were the original; it was subsequently exhibited in Edinburgh, and the Royal Hibernian Academy, Dublin, 1906 (32). Dilke at once protested to Mrs Watts, and to several influential people in the art world (his letters to Cust are in the NPG archives). He referred to this version as an indifferent copy, but Mrs Watts was sure that it had been painted by her husband, as it had hung in his gallery at Little Holland House and at Limmerslease. Mrs Watts did, however, agree that this third version was a replica of the NPG replica, and had no status as an original portrait. It is now in the Watts Gallery, Compton, and is much the flattest and weakest of the three versions. Watts often played about with several canvases at the same time, and he often worked on them subsequently. In the case of Carlyle (see NPG 1002), the original is in the Victoria and Albert Museum, a good version in the NPG, and a scrappy, unfinished version in the Ashmolean Museum.