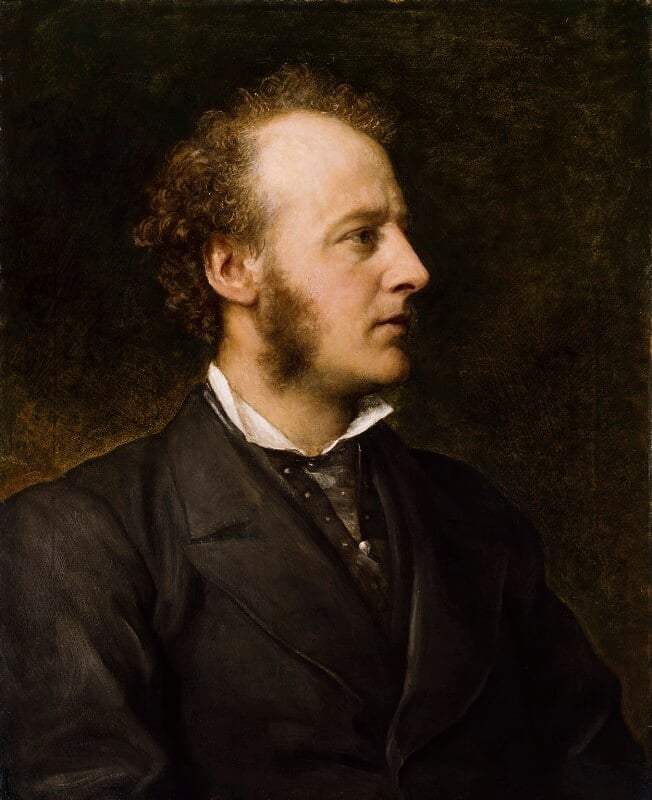 George Frederic Watts gave a series of portraits of contemporaries – a ‘Hall of Fame’ – to the National Portrait Gallery in 1895. His portrait of Millais, NPG 3552, though a highly appropriate subject and in the same format, already belonged to the sitter and was not part of the gift. It had been exhibited in 1871, at a time when Watts needed the income yet was striving to give up his portrait practice. [1] ‘For the last year’, he wrote in 1869, ‘I have been besieged with applications to paint portraits, & have declined all, and mean to decline all, for they make me miserable & keep me poor.’ [2]

Painting Millais would have been an exception. Millais was a ‘dear friend’ and a sitter with a fine head. There was no financial transaction: the portrait was a gift to the family, and in 1876 Millais gave Watts a subject picture of a woman sewing. ‘“Stitch, Stitch, Stitch” was now painted’, wrote J.G. Millais, ‘and presented to G.F. Watts, R.A., in return for the excellent portrait of Millais by that great artist.’ Watts thanked him warmly for the present: ‘You have never done anything better. I shall have it up in my studio, as an example to follow.’[3]

Yet Watts was not uncritical of Millais as an artist. He was twelve years older (and outlived him by eight); he observed his mutation from radical Pre-Raphaelite to successful academician, the notoriety and commercial success. He admired Millais’s ‘sheer natural ability’ but regretted he rarely achieved what ‘his splendid genius should have afforded’. Like Landseer, the other of ‘the two Artists who ought to have raised the Banner of Art in England & planted it in the very noblest place’, he had suffered from too early success. [4] ‘Millais is of course a great painter but that is not quite enough,’ he wrote to Burne-Jones in 1893. ‘This is naturally only for your eye. There are many whom I really admire very much, but somehow feel that intellectual grasp is wanting.’ [5] Later, at Millais’s memorial exhibition in 1898, Watts put him on a par with Velazquez as the best painters of ‘a man’s exterior’; for example, he thought Millais’s portrait of Gladstone caught the ‘attitude and fire’ but showed no depth of character. [6]

Millais for his part hugely admired Watts’s equestrian statue Physical Energy (1886) and considered his 1891 portrait of Walter Crane (NPG 1750) ‘sublime’. Soon after the presentation of the series of portraits to the NPG in 1895, Millais wrote to Watts to congratulate him on the grand gesture: ‘…you have left all those admirable portraits, I know so well, to the Gallery – a really Splendid Gift’.[7]

In July 1869 William Michael Rossetti noted a portrait of Millais in Watts’s studio, which suggests that work extended over a long period. [8] When it was exhibited at the Royal Academy in 1871 it was outshone by its neighbour, Watts’s portrait of Lord Leighton (1871; Leighton House Museum). The Athenaeum wrote, ‘The portrait of J.E. Millais, Esq., R.A. (172), a profile, to the waist, although admirably painted, is not equal to its neighbour here, the portrait of F. Leighton, Esq., R.A. (177): pictorially speaking, there is nothing to be desired for the former, but one misses something of the finer elements of the face. Mr. Watts was, doubtless, unfortunate in having Mr. Millais to sit when he was not in one of his better moods.’ [9] Comparing the two paintings one is struck by the difference. Millais is, as usual, turned out as a gentleman with no indication as to his profession, whereas Leighton uses dress to celebrate the same profession. Millais’s biographer explained the unusual attitude: ‘In [the matter of Millais’s clothes], though his apparel proclaimed the man, it certainly did not proclaim the artist. He hated the affectation of the long-haired and velvet-coated tribe, whose exterior is commonly more noticeable than their Art, and just dressed like other men according to circumstances of time and place, only too happy to escape the observation of strangers as he moved about the world.’ [10]

In 1878 Millais wrote to Watts asking his permission for a Mr Trendall to make a print after his portrait, ‘… to let him engrave your portrait of me for a publication’. [11] This is probably connected with the anonymous wood-engraving which appeared in the Magazine of Art and in M.H. Spielmann’s biography. [12] After Millais’s death Watts was asked by Lionel Cust, director of the NPG, if he would make a copy of his portrait: ‘With regard to the proposition of painting a replica of my portrait of my old and dear friend Sir J. Millais’, he replied, ‘I should be glad to do it for the sake of that old friendship, & because I have given the portrait of my very dear friend the last President but I really have not time for all the tasks I have set myself.’ [13] So NPG 3552 is the unique version.

The painting was therefore not part of the 1895 Watts gift but was purchased by the Gallery from Millais’s grandson, Sir Ralph Millais, in 1948. He initially asked £750 for it due to ‘unpropitious times’, before reducing the price to £475. The figure finally agreed upon was £400, still a high sum for Victorian art at the time. The National Art Collections Fund contributed £150 towards the purchase. [14]

The sitter; by descent in the family to Sir Ralph Millais Bt, from whom purchased, with assistance from the NACF, 1948.