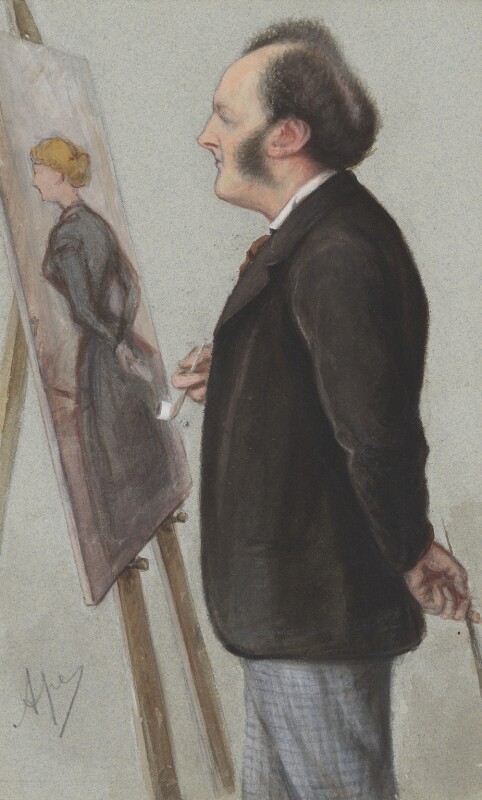 The print after this drawing was published in Vanity Fair on 13 May 1871, [1] at the time of the Royal Academy Summer Exhibition and habitual good reviews of Millais’s work. In the same month his handsome profile could be admired in an oil painting by George Frederic Watts exhibited at the same RA show (172, now NPG 3552).

Carlo Pellegrini (who drew under the name ‘Ape’), chief cartoonist for Vanity Fair, was not among Millais’s admirers. ‘Whistler’s work he adored and Millais’ he detested,’ wrote his colleague Leslie Ward. [2] So in this drawing, Pellegrini seems to have relished spoiling the sitter’s reputation by giving him a scowl and an aged silhouette. The moodiness is even more explicit in the print, drily captioned ‘A converted pre-Raphaelite’. [3] The accompanying biographical sketch (by Thomas Gibson Bowles) is kinder than the caricature; [4] Millais’s reactions are not recorded.

Pellegrini nursed ambitions to be a portrait painter, and Millais’s success represented a challenge. He left Vanity Fair twice in the 1870s in an attempt to change career, but without success. Ward wrote:

His intention was to outshine Millais, whom he found uncongenial as an artist, and whose work he prophesied would not survive a lifetime’s popularity. One of his favourite recreations was to discuss Millais and his success in relation to himself when he had gained fame as a painter. One day, on this subject, after working himself up into his customary excitement, he twisted a piece of paper into a funnel-shaped roll, and said to me:–‘Now Millais ambitions go in like this’ – pointing to the big end, ‘and become this’ – turning up the smaller end. ‘And mine begin small and go on…’ Here he opened his arms as if to embrace the infinite. [5]

The drawing was sold at Christie’s, 7 March 1912 (533), and bought by ‘Larkin’ for £19.19s.6d (19 guineas), a relatively high price at that sale. It was later offered for purchase to the National Portrait Gallery by Mr Charles Newman in June 1933, together with four other drawings for Vanity Fair, for a total of £15.15s, or an asking price of three guineas per drawing. [6]

Three-quarter-length to left, head in profile, standing at easel (female figure on canvas), holding pipe in right hand and paint brush in left.