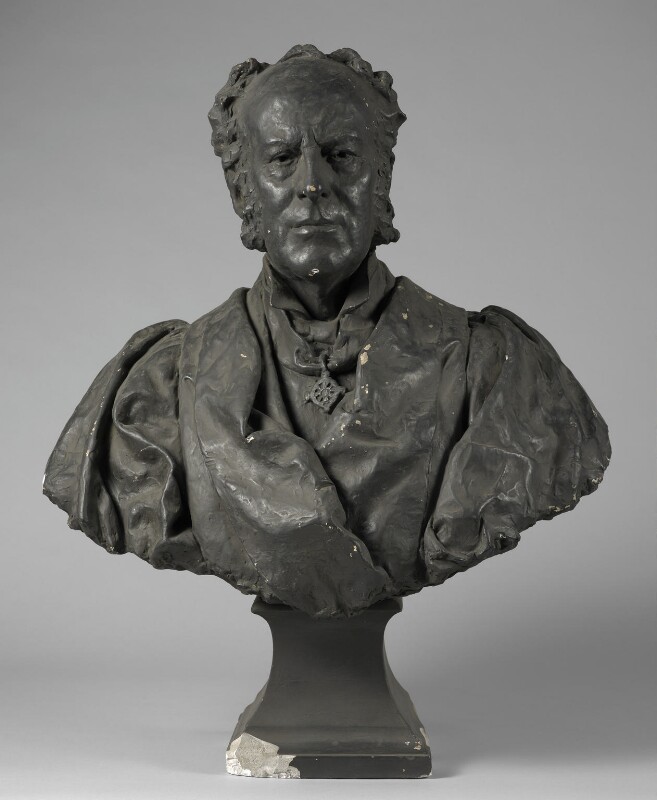 Edward Onslow Ford’s bust of Millais, of which NPG 1329 is a plaster cast, was a Royal Academy presidential portrait, a companion piece to Thomas Brock’s earlier bust of Lord Leighton of 1892. [1] The bronze was presented to the RA by the sculptor and exhibited in 1897 (1993). It was the last portrait that Millais sat for.

It was produced when he was terminally ill, but Ford skilfully overlooked the temporal for the essence, to the satisfaction of family and critics. J.G. Millais wrote:

The bust modelled by Onslow Ford, R.A., in 1896, is about as fine a piece of work as that great sculptor has ever done. It was absolutely true to life – almost painfully true to those who knew Millais in his latter days; and as a critic [M.H. Spielmann] says, ‘It is a splendidly decorative work, showing the President in the robes of his office, with the chain and medal across his shoulders, and the Prussian Order, “Pour le Mérite,” about his neck. Although, as may be seen, it was wrought when the shadow of death was already enveloping the painter so that the geniality of the man has given way in some measure to the suggestion of suffering, dominated by the strenousness of life – it remains, in its finely observed and lovingly modelled head, one of the three principal works left to show what manner of man he was. In the Exhibition [J.E. Millais Memorial exhibition, RA, 1898] it was accorded a position in a room by itself, so placed that it might meet the eye of the visitor with its keen and saddened look, as he passed from the contemplation of the master’s works.’ [2]

Meanwhile, the Athenaeum described how

the sculptor found the President, while he sat for this bust, thoughtful and weary, but noticed how often, through the languors of decline and strain of almost constant pain, flashes of the old kindliness, the glow of genius and energy which suffering could not utterly subdue, broke through and rendered his task almost a happy one. The likeness is one of the most exact and animated: its very pathos attests thus much, while the execution, being less polished and finished than usual with the sculptor, proves at once the portrait’s veracity and the extraordinary skill of the hands to which we owe this precious record of a great artist. [3]

Spielmann admired Ford’s ability to combine telling detail without losing sense of the whole: ‘In his portrait busts Mr Ford excels. They are speaking likenesses: in every instance the man himself (or the lady) is before you […] To come to detail, it should be said that while the treatment is clever throughout – hair, coat, tie, and even stiffened collar – the flesh and bone invariably retain their tone relation, both of handling and effect.’ [4] And in its obituary memoir of Ford, published 4 January 1902, the Athenaeum claimed ‘no modern sculptor was happier than Ford as a likeness-taker’.

Edward Onslow Ford died unexpectedly young leaving a wife and large family. A few months later his son W. Onslow Ford approached the National Portrait Gallery’s director, Lionel Cust, to remind him of his earlier stated interest in acquiring Ford portrait busts. Cust selected busts of Millais, T.H. Huxley and Lord Strathnairn. Ford tried to persuade Cust to choose the bronze versions (‘the work shows up more in that material’) but Cust went for plaster casts. There was a significant difference in price: ‘…the busts in question are £75. 80 & 80 in bronze. The plasters are £6. each.’ [5]

The plaster bought by the NPG lacks the PRA medal and chain of office draped across the shoulders of the bronze. It also has an integral plaster socle, whereas the RA bronze has a separate marble one.