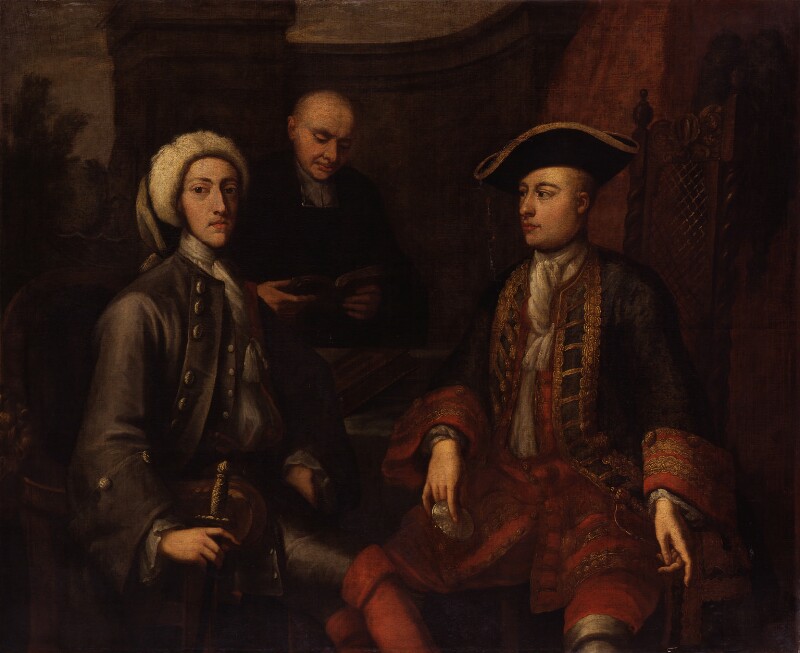 The attribution to John Verelst, first suggested by Waterhouse, depends upon the rather odd signature, previously associated with John Vanderbank.
Accepted in 1924 as a portrait of John Montagu, 2nd Duke of Montagu, with James O'Hara, 2nd Baron Tyrawley, and a Priest. These identities are not well supported; comparison with other portraits of Tyrawley and Montagu is not conclusive and an occasion for such a group has not been identified. The 1911 Boughton catalogue identified James Tyrawley on the right holding a silver snuff box, with on the left the Duke of Montagu (a relative of the Dukes of Buccleuch who presented NPG 2034 in 1924). Yet the right-hand figure appears the more distinguished. In 1724 Tyrawley was simply Captain O'Hara, while Montagu, who had little taste for war and had inherited his dukedom three years before, already held a Court appointment.
James O'Hara (1681/2-1773) campaigned in Flanders and Spain; he became colonel in 1713, Baron Kilmaine (I) in 1722 and 2nd Baron Tyrawley in 1724; he later followed a diplomatic career in Russia and Portugal. Horace Walpole described him as 'haughty and contemptuous, with an undaunted portion of spirit'. An inscribed three-quarter-length portrait in the Landesgalerie Hanover, possibly by Jervas c.1725, shows him wearing a Baron's coronation robes, his coronet beside him, and Tyrawley appeared four times in Reynolds' sitter books in January and February 1758 (according to Graves & Cronin, A History of the Works of Sir Joshua Reynolds, 1899-1901, III, p 994, a portrait of Tyrawley by Reynolds was sold by Col. O'Hara at Christie's, 28 May 1824, lot 31.