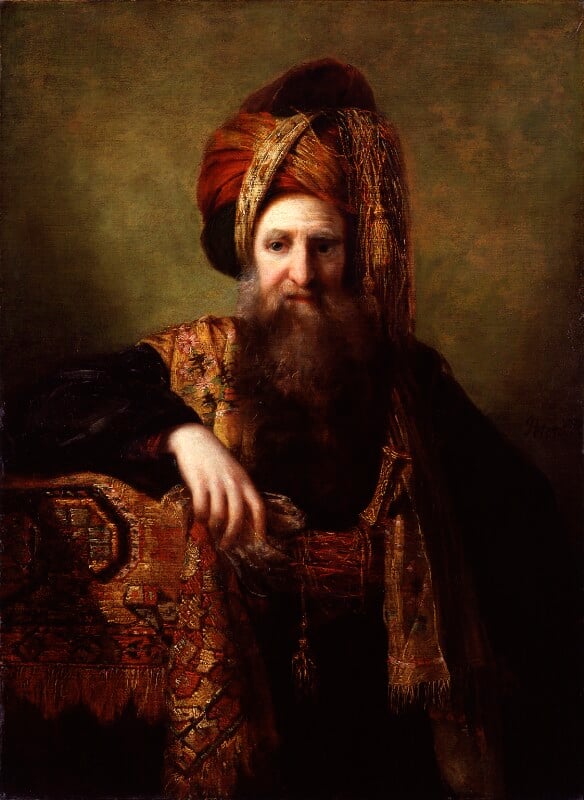 Wortley Montagu lived in Venice from July 1773 until his death in April 1776. When the Duke of Hamilton visited him there he found him ‘wonderfully prejudiced in favour of the Turkish character and manners, which he thinks infinitely preferable to the European, or those of any other nation’; Nichols described him ‘living in Venice with the manners, the habit, and the magnificence of a Turk’. [1] Peters had been in Venice for a year from March 1772 and intended to leave Rome for Parma in April 1775; NPG 4573 suggests he may have returned to Venice before returning to England in 1776. Romney, who was in Venice in March-April 1775, also painted Montagu there.
A small sketch resembling NPG 4573 was with the Marquess of Bute in 1913. [2]

Blue eyes, thin grey beard, wearing a turban with red, dark green and gold decoration, a black gown and a richly figured gold scarf; a gold-handled dagger hangs from his red belt by a gold cord; a Turkey rug over the table to the left.

William, 2nd Viscount Courtenay 1776; 3rd Viscount Courtenay sale, Christie’s, 27 April 1816, lot 78 (Peters, Portrait of Wortley Montagu, In his Asiatick Dress, painted with the rich and golden effect of Rembrandt’s colouring; a very surprising effect of this painter), bought by the 2nd Marquess of Stafford (Duke of Sutherland 1803);1 by descent to Elizabeth, Countess of Sutherland (niece of the 5th Duke of Sutherland), and sold Christie’s, 7 July 1967, lot 91 (as The Turk),2 bought Leggatt for the NPG.