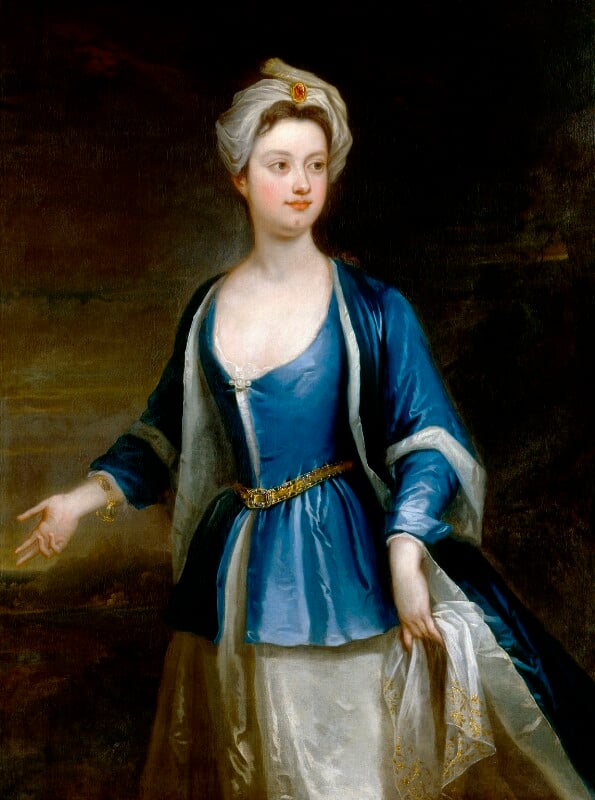 On comparison with authentic portraits and in particular with one at Dulwich which is very close in pose and features, NPG 2506 is now believed to represent Dorothy, Viscountess Townshend (1686-1726), [1] sister of Sir Robert Walpole and second wife of Charles, 2nd Viscount Townshend. The features agree well with known portraits such as the Kneller signed and dated 1715, sold by Lady Townshend, Christie's, 4 July 1947, lot 4 and the head by Jervas at Holkham. In the Dulwich painting the sitter is shown holding her surcoat instead of the fichu (or scarf) in NPG 2506, and there are tents in the background, left.

Dark brown hair, centre-parted, brown eyes, near-white eyebrows, dimpled chin, turban with brooch, centre; blue robe and waistcoat, Turkish style, gold belt over white shirt, white, gold-embroidered fichu(?) held in her left hand, a bracelet with a miniature of a man on her right wrist; landscape background, now somewhat indistinct, may include a bay or valley and a hill.

Rubbed; discoloured varnish; small old damages above the head and the base of throat.