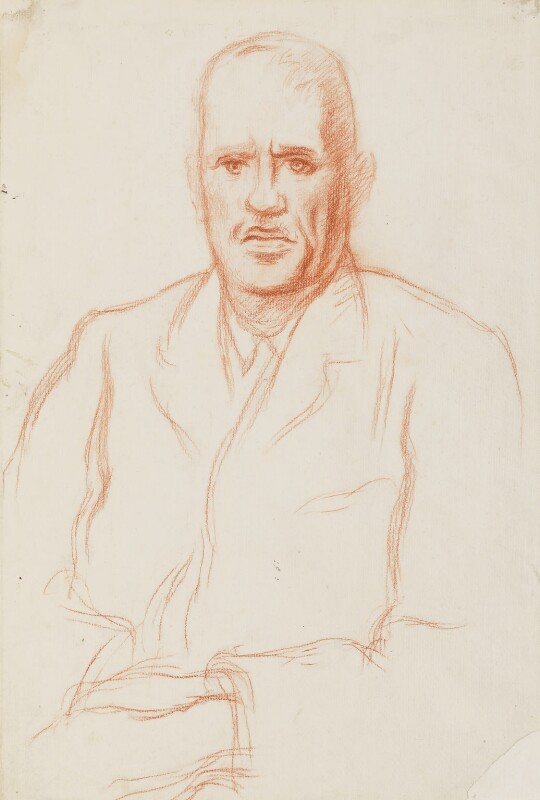 In 1934 Claude Montefiore resigned the presidency of University College, Southampton, due to ill health. He had been president since 1913, and vice-president of the college’s earlier incarnation, Hartley University College, since 1908. William Rothenstein was commissioned to paint Montefiore to honour the long association. Sittings took place in 1935, and this drawing is one of the preparatory studies. The painting, sober and monochromatic, shows a bulky seated figure, hands folded on lap, the head enlivened by a luminous expression; see University of Southampton Art Collection, 59. Rothenstein, like many before him, fell under the spell of Montefiore’s personality. As he recalled:

After painting Sir Charles Welby [1935] I was asked to make a portrait of Claud[sic] Montefiore for the University College of Southampton, of which he had for long been President. Though a man of great wealth, Montefiore was a saint. His velvet eyes shone with goodness and, too, with a gentle humour. His inattention to appearance meant that he came to sit, now clean shaved, now with three or four days’ growth of bristly beard. He was a strong anti-Zionist and foresaw trouble through the Balfour declaration, though how great the trouble was to be he did not live to know.[1]

In 1959 Rothenstein’s son Sir John Rothenstein presented Southampton University with a set of large unfinished panels, painted by his father during the First World War. Why John Rothenstein chose Southampton as the recipient of these works is not explained in his 1950s memoir, Time’s Thievish Progress (1970). It may (just) be speculated he was aware of his father’s admiration for Montefiore, and the latter’s tireless work for University College. Certainly the university’s new buildings, opened in 1914 during Montefiore’s presidency, presented an appropriate setting for William Rothenstein’s wartime mural.

NPG 4789 is one of two extant studies for the oil portrait at Southampton. These appeared in a large collection of Rothenstein drawings with the dealers Deval and Muir, Bishop’s Stortford, in 1970. The three-quarter-length study, now NPG 4789, was priced at £16.16s. It was purchased by the National Portrait Gallery in April 1970, together with 42 other portraits; for the full listing see NPG Portrait Set ‘Drawings by Sir William Rothenstein, 1899–1938’. [2] The head and shoulders study is now at Tate Archive, London, William Rothenstein Collection, TGA 997/13 (see ‘All known portraits, Paintings, drawings, sculptures and prints, c.1935’).

The artist; purchased from Deval and Muir, April 1970.