3 of 11 portraits of Hannah More 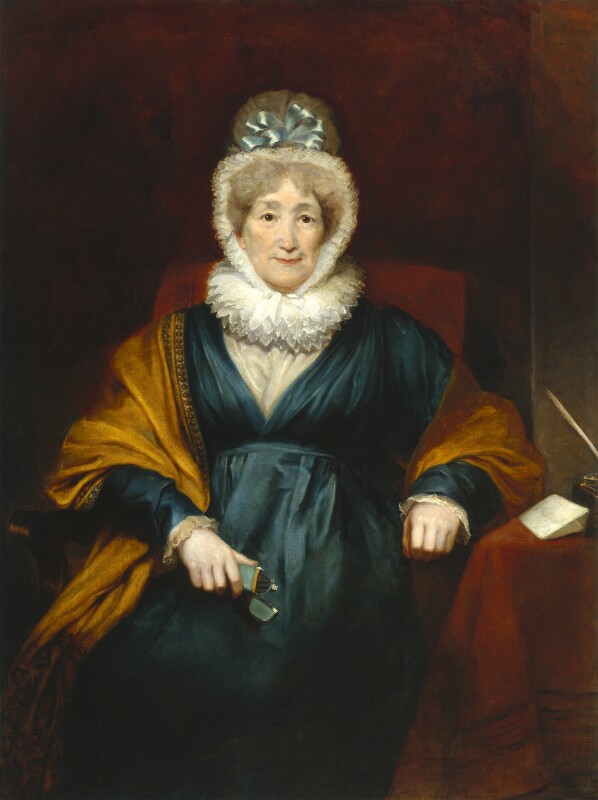 The genesis and the anguish of Pickersgill’s portrait was several times described in Hannah More’s letters. She didn’t want to sit: ‘I have opposed it with all my might. Morally and physically it is grievous to me’, she complained, [1] but in October 1821 she had to explain that

'An ardent friend, Sir Thomas Acland, who by the most affectionate tyranny, is sure to carry every thing his own way, has actually, against my vehemently-repeated refusal, sent down Mr Pickersgill from London, and your poor old friend is condemned, sorely against her will, and on the verge of eternity, to see ‘the lack-lustre eye’, and corrugated visage, snatched a little while from oblivion. The picture is for Sir Thomas, and at his expense. Besides the fatigue of sitting four hours a-day to a painter, I object, in a moral point of view, that so much time out of my little fragment of life should be so spent.' [2]
Pickersgill stayed in her house, Barley Wood in Wrington, Devon, [3] and in the event painted two portraits, the second for Lovell Gwatkin, as she wrote on 16 October 1821:

'You know it was my hard fate to sit for two portraits, lest the one friend should think his a copy of the other. It happens that each proprietor likes his own best. I believe the painter has made the best of my withered visage. You are aware with what extreme reluctance I submitted to the operation.' [4]
As it now appears, NPG 412 differs from the original Acland portrait at Killerton, [5] as engraved by Worthington, as follows:
a) the striped material on the chair back is just visible on the left but not on the right, where the size of the chair back has been much reduced.
b) There is no candle holder on the table.
c) The richly patterned tablecloth is much plainer.
d) The grey strip on the right of NPG 412 does not appear in the original, which shows a large dark drape sweeping across the whole background, with a glimpse of sky on the extreme left above the chair arm.
While a-c may conceivably be explained by the indifferent condition, d cannot, indicating that NPG 412 is a slightly simplified version. What happened to Lovell Gwatkin’s portrait is unclear, but NPG 412, evidently a third version, was retained by Pickersgill and appeared in his studio sale in 1875. A modest half-length version in poor condition was owned by Mrs O. G. A. Phillips in 1953; an enamel after Pickersgill by Thomas Roth was exhibited RA 1824 (619); an unattributed miniature is in the Bristol Art Gallery, and another by Mrs Purcell was sold Sotheby’s, 29 April 1968, lot 476. [6] Examples of a biscuit statuette based on the Pickersgill portrait are in Brighton Art Gallery [7] and at Killerton.

Brown eyes, grey hair, wearing a white bonnet with blue silk ribbon, a blue dress over a white blouse, a gold wrap round her shoulders with a green, red and white border; a light blue spectacle-case in her right hand; she sits in a dull-red upholstered chair (a vertical stripe appears on the left); to the right a table, with a red cloth, ink, quill, and a folded paper inscribed W. Wilberforce.1