1 of 60 portraits of May Morris 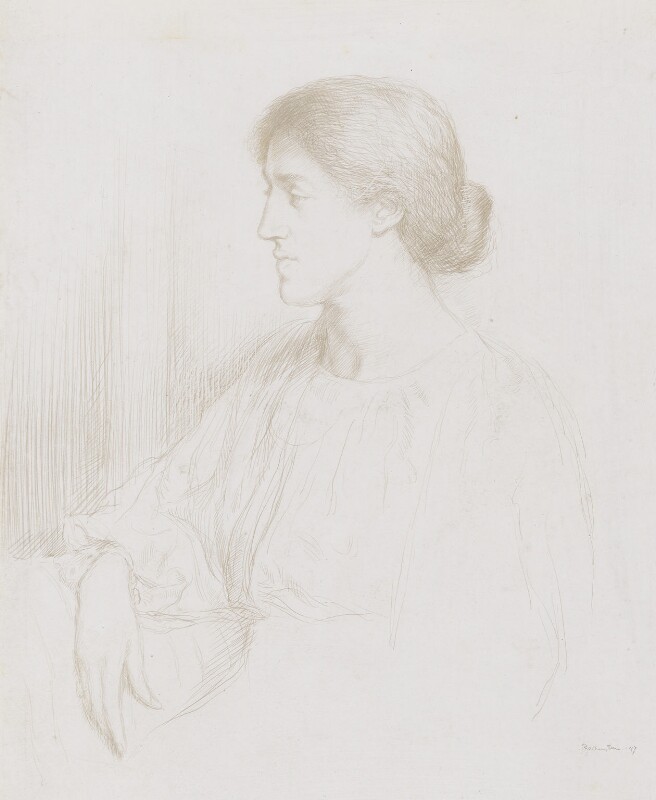 This delicate drawing is one of 130 portrait drawings by William Rothenstein in the National Portrait Gallery Collection, and the only one executed in silverpoint. On the verso there is an unrelated pencil sketch, a profile view of a nose and eye, crossed through.

In 1897 May Morris was aged 35, an established needlewoman and instructor, author of the textbook Decorative Needlework (1893). She was also in mourning for the recent death of her father William Morris, renowned designer, author and Socialist. The drawing depicts May in a pose allusive of Pre-Raphaelite images of her mother Jane Morris, whose features were at this date familiar through the works of Dante Gabriel Rossetti. Here the profile view, which is close in aspect to that in a contemporary portrait by an unidentified photographer (see ‘All known portraits, Photographs, early 1890s’) rather unflatteringly accentuates May’s prominent chin, nose and low forehead. She is shown wearing a plain, collarless dress, with her hair in a simple bun. Both pose and depiction have a sombre quality, indirectly reflecting her bereavement.

During the early 1900s, artist and sitter became well-acquainted fellow members of the British art world, having many friends in common and sharing particular interests in traditional and modern crafts. By his own account Rothenstein first met the Morris family around 1895, when William Morris was already ill. He recalled that May Morris ‘often came’ to a small restaurant in Lisle Street, Soho, patronized by artists. After William Morris’s death in October 1896 Rothenstein was invited to May’s house in Hammersmith Terrace, to meet her mother Jane. He described one such visit:

This reminiscence implies that the present drawing was made in the sitter’s Hammersmith home, presumably by prior arrangement as the artist used a support expressly prepared for silverpoint drawing. [2] It probably dates from summer or autumn of 1897, because at the beginning of the year May and Jane Morris spent several weeks in Egypt.

Its subsequent history is unclear, but by 1926 it was in the possession of Dr Robert Steele, translator and antiquarian, friend of May Morris. In this year it was first reproduced, under the title ‘Miss May Morris. Designer, Embroiderer and Editor of the Collected Works of her father Mr William Morris’. [3]

After her death, the work was acquired from Steele, whom May Morris had asked to dispose of photographs and manuscript papers to various national museums and collections, including the British Museum, Tate Gallery and NPG. [4] Over 60 of the Morris family photographs in the NPG Collection came from Steele in this manner (see ‘All known portraits, Photographs’). This portrait had not belonged to May, and Steele offered it on his own behalf. He wrote:

You will have observed that Miss May Morris has left Kelmscott Manor & its contents to Oxford University. I have a very brilliant silverpoint of her by Rothenstein, which I shd. be glad to present to the Portrait Gallery. I am aware of the 10 years rule, but as I am 79 I do not expect to be able to make the offer in 1948 when the delay is over. I do not think there is any portrait of her of note after the Rossetti painting of her as a child. However, I leave the matter in your hands. [5]

NPG director Henry Hake replied, ‘Thank you for your letter: I will take the portrait of Miss May Morris first. If you could bring it here or let me come and fetch it I would show it to the Trustees when they meet in April. Whatever happens about the 10 years rule the drawing ought to be seen now.’ [6]

Half-length, profile to left, right arm and hand resting on back of sofa or chair, left arm not delineated.

View all known portraits for Mary ('May') Morris