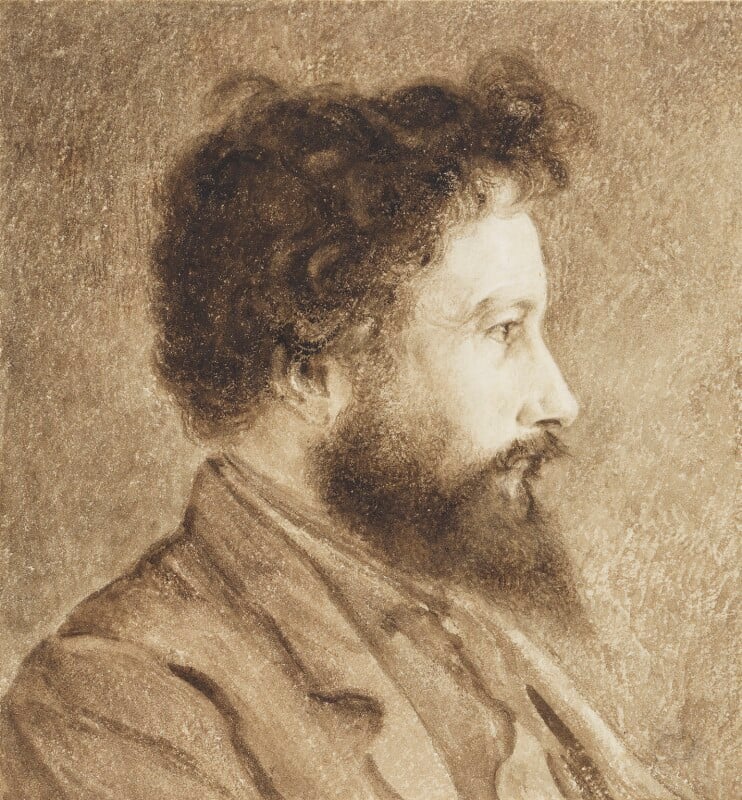 Charles Fairfax Murray began his professional life as an assistant in the studios of Edward Burne-Jones and Dante Gabriel Rossetti; he was introduced to William Morris around 1868 and did some work for ‘the Firm’, transferring designs to panels, tiles and glass. [1] The age difference was initially significant – it was Morris who first introduced Murray to continental travel, as a twenty-first birthday present – but the relationship shifted subtly over the years. In 1893 Morris was advocating Murray’s suitability for the post of director of the National Gallery. And in 1896, only months before his death, he was consulting Murray about the purchase of a medieval bestiary. Murray visited Kelmscott House on 3 October and made three very tender drawings of his old mentor on his deathbed (see NPG 3021).

Morris began work on an illuminated manuscript on vellum of his poems, A Book of Verse, in February 1870. [2] This collaborative work, involving Morris, Murray and George Wardle, was eventually presented to Georgina Burne-Jones on her birthday in August 1870. The miniature roundel of Morris on the title-page was drawn by Murray, and is clearly connected with a photograph by John Robert Parsons taken on 14 June 1870. [3] The miniature is fully coloured and facing to left, but otherwise very close to the profile in NPG 3652. However, both profiles cannot be after Parsons’s photograph as NPG 3652 bears an even greater resemblance to an earlier monochrome wash drawing, a half-length of Morris by Murray, signed and dated ‘JAN.1.1870.’, now in the collection of the Whitworth Art Gallery, Manchester (see ‘All known portraits’).

This set of four interrelated profiles is a puzzle, but an explanation may be offered. It seems that Morris was pleased with the first portrait by Murray, the half-length. A closely related, undated head-and-shoulders version was also produced – this was NPG 3652. In June, when it came to designing the title-page to the poetry manuscript, Morris booked a photographic sitting with Parsons and took Murray with him, to help arrange a pose similar to the successful January drawing; Murray then drew the title-page roundel from both live sittings and the Parsons photograph. [4]

Around 1935 the drawing was spotted in a bookshop by Christopher Hughes, who showed it to May Morris, then in her seventies. ‘I came across this sketch of William Morris among some prints in a bookshop. I knew Miss May Morris and sent it to her […] She told me that it was the best portrait ever done of her Father.’ [5] May Morris’s response to Hughes had been initially cautious:

I cannot absolutely pronounce upon this drawing, but feel very nearly certain that it is by Charles Fairfax Murray. It is like his execution, and the pose and whole look of the drawing resembles to my mind a profile done for one of the MSS that my Father painted for Mrs. Burne-Jones early in the seventies. The ‘William Morris’ at the bottom also looks to me like Murray’s handwriting. I suppose there would be no clue in the provenanace of the drawing? Yours sincerely May Morris It is a lovely drawing: if you ever think of having it reproduced, would you bestow a copy on me? It is a valuable record of my Father’s head in that time. I have just looked up my notes: Fairfax Murray did the delicate miniature head in “A Book of Verse”, and this was about 1870. M.M. [6]

The drawing (now NPG 3652) was, in fact, the image chosen to represent William Morris in the first volume of May Morris’s William Morris: Artist Writer Socialist, published the following year (1936), in a photogravure frontispiece by Emery Walker.

Purchased in a bookshop by Christopher Hughes, c.1935; presented as a gift to the Gallery, March 1949.