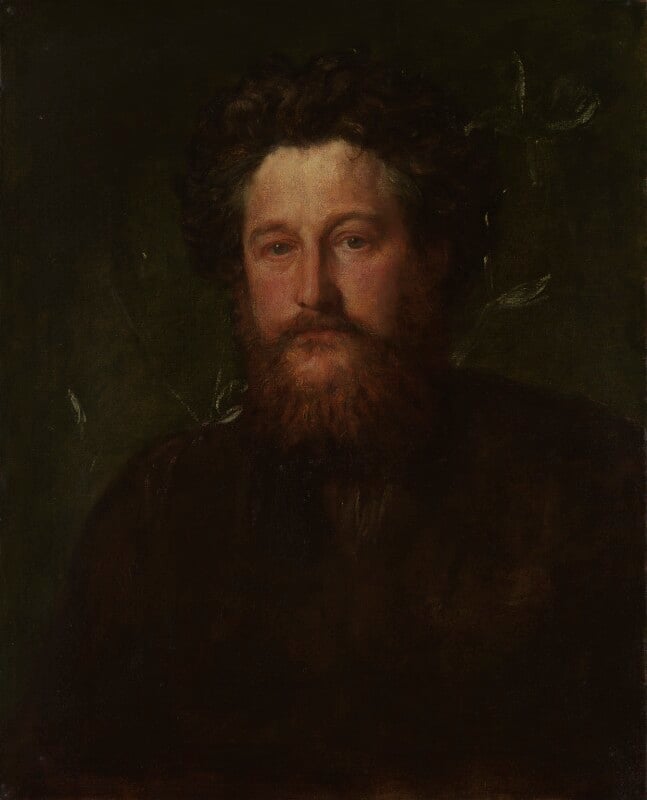 William Morris sat to George Frederic Watts in April 1870, a few months after Edward Burne-Jones: theirs were further heads to add to Watts’s growing collection of eminent Victorians, his ‘Hall of Fame’. Morris’s phenomenal busyness, his impatience and apparent dislike of sitting add further value to Watts’s portrait. [1] Not only is it the prime portrait in oils in Morris’s small painted iconography: it owes its existence to Watts’s perseverance, his ambition to realize a pantheon of great Victorians. And it owes its iconic status to Watts’s determination to present selections of his portrait heads to the nation – here the National Portrait Gallery – for the fullest public display.

‘I am going to sit to Watts this afternoon,’ wrote Morris to his wife Jane, ‘though I have got a devil of a cold-in-the-head, which don’t make it very suitable.’ [2] According to Mary Watts there may have been just one sitting: ‘there exists a legend that Mr. Watts had but one sitting for the fine head in this portrait’. [3] Soon after the Morris sitting financial necessity led to a lull in Watts’s private production, as he was forced to accept portrait commissions to fund the building of a new house and studio. He often complained of the anxiety and drudgery of the professional portraitist: ‘no one can imagine the intense weariness of my existence as a portrait painter’. [4] Almost no new subjects were added to the pantheon for about a decade. In 1880 he showed the portrait of Morris at the Grosvenor Gallery Summer Exhibition, possibly after some reworking. [5] This would explain why the portrait – which is not inscribed – has been variously dated 1870 and 1880. It was dated 1880 at the time of its presentation to the NPG. [6]

There are over fifty portraits by Watts at the NPG. The first wave consisted of a gift of seventeen pictures presented in December 1895; the spur was Ewan Christian’s new building in St Martin’s Place, which opened to the public in April 1896. The present portrait was officially presented in 1897, although it had been earmarked earlier, in September 1895: Gallery rules precluded displaying it during the sitter’s lifetime, and it had remained with the artist. However, when the time came – Morris having died on 3 October 1896 – Watts evidently wished to hold on to the painting for longer: ‘Of course the portrait of William Morris is the property of the Gallery & if claimed now shall be sent to you, but I should much like to have it for a short time to form part of an exhibition of my works in the Winter exhibition to have place in the New Gallery, please let me know if this can be.’ In the course of the exhibition the director of the New Gallery, L.C. Lindsay, wrote, ‘of course if the Portrait of William Morris must be submitted to your Board on the 25th [February 1897] I shall be happy to allow you take it for the meeting. As it naturally at present is one which is giving great interest I should like it to be away for as short a time as possible.’ [7] In fact the portrait had been widely exhibited from 1880 onwards; it was and remains one of Watts’s best-loved portraits.

As with the other Watts gifts and bequests, NPG 1078 arrived in its Watts-style frame of gilded oak. [8] In 1896 the artist gave ‘exclusive photographic right’ over his pictures to Frederick Hollyer, and the portrait was much reproduced; it formed the basis of many of the obituary illustrations. [9] There is a copy of the painting by Henry Holiday in the collection of the Society for the Protection of Ancient Buildings, London, and further copies at Castle Howard, Yorkshire and Marlborough College (copy or replica). As listed in the Register of applications to copy portraits, NPG 77/5, two artists applied to copy NPG 1078 in the period 1896–1954: K.M. Bishop, working between 11 September and 4 November 1920; and Kenneth Robinson, working between 28 October 1949 and 9 May 1950. For the mezzotint by Malcolm Osborne (and his interpretation of the background) see ‘All known portraits, By other artists, Posthumous portraits, exh. 1913’.

In 1900 G.K. Chesterton, reviewing the Watts hang at the NPG, dwelt with relish on this portrait:

Mr Watts has been under his own perfect inspiration again in painting the accessories of Morris’s picture: there is something appropriate in the way in which the living, leonine head projects from a background of green and silver decoration. This immersion of a singularly full-blooded and aggressive man in the minutiæ of aesthetics was the paradox that attracted men to Morris. The public associated aestheticism with a certain languid triviality; the spectacle of a big jovial man going into a towering moral passion over a dado opened a new world to them; he seemed to be preaching an ethical duty, he appeared to regard a colour that hurt the eye as a literal bodily assault, and to see in two discordant hues the horror of an unlawful marriage. Mr Watts has caught the air of this strange frenzy of good taste to perfection. [10]

The artist; presented by him February 1897.

Treasures from the National Portrait Gallery, five venues in Japan, 1995–6 (29).