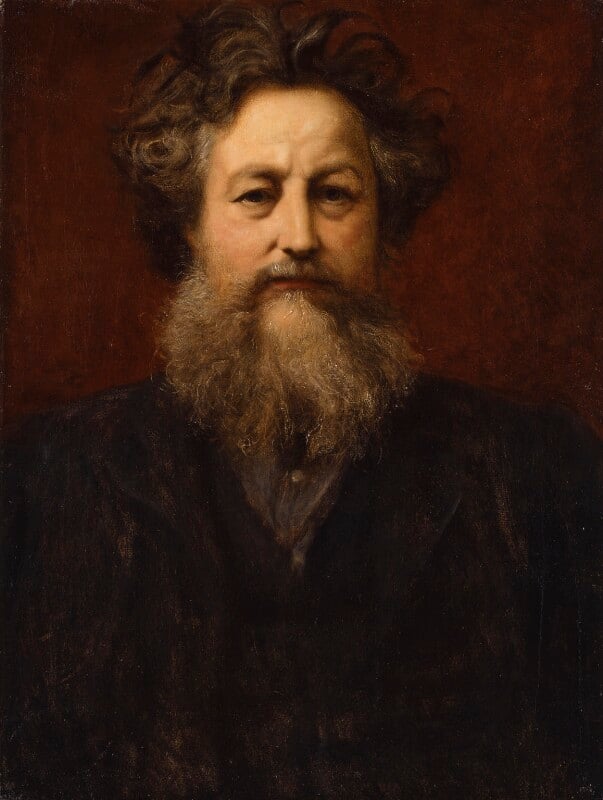 William Blake Richmond was Morris’s junior by eight years. He remembered Morris and Edward Burne-Jones being pointed out to him as ‘great oddities’ – even among the Aesthetic set – when visiting his older brother at Oxford in 1854: ‘Little then did I imagine that these two boys would, ere many years, become my dearest friends and honoured acquaintances.’ [1] In 1859, in his capacity as a young corporal with the Artists’ Rifle Corps, Richmond drilled a typically disorderly company of Artist Volunteers: ‘William Morris, for example, invariably turned to the “right” when the order was “left”.’ [2] Years later, Morris successfully promoted Richmond’s application to the Slade professorship in 1879, and the friendship was further strengthened when the Morrises moved to Kelmscott House in 1880, close to the Richmonds in Hammersmith. Some of the most perceptive of all descriptions of Morris are to be found in The Richmond Papers (see Stirling 1926).

This portrait is undated. Richmond sent it to the Grosvenor Gallery Summer Exhibition in May 1882 (114). As the format was similar to that of the bust by George Frederic Watts (exh. Grosvenor G., 1880, now NPG 1078), the portraits were inevitably compared. The reviewer from the Athenaeum wrote:

It is unfortunate for Mr. Richmond that Mr. Watts’s noble likenesses of Mr. R. Browning and Mr. W. Morris were so lately hung where the younger painter’s two portraits of these poets, Nos. 112 and 114, now hang, as it is impossible to avoid comparison. If the handling of No. 77 [Richmond’s portrait of Gladstone] is too rough, Nos. 112 and 114 are too smooth. Mr. Morris’s features are not so full and flat; his carnations here lack clearness and richness in their inner tints; the expression, although excessively demonstrative, is not really energetic. [3]

This is not quite true: the head, set close to the picture plane, conveys the peculiar, brooding energy which is otherwise best captured in some of the photographs.

Other Richmond works connected with Morris are a back-view caricature, ‘William Morris in a thunderstorm’ (undated), [4] and a head-and-shoulders (based on the familiar photograph by Frederick Hollyer; see ‘All known portraits, Photographs, 1884, pose [a]’) attributed to him, belonging to the William Morris Society. There is also an enigmatic reference in 1877 to a ‘recent likeness’ of Morris by ‘Richmond’. [5] Richmond remained Morris’s faithful companion in the years of decline (‘Richmond is coming in to amuse me tonight’), [6] and, like Charles Fairfax Murray (see NPG 3021), he was granted the great privilege of making a deathbed drawing of Morris, on 4 October 1896. [7]

The portrait was offered for sale to the National Portrait Gallery by Sir Herbert Richmond, the artist’s second son. ‘The Morris was painted in the eighties, and is as I remember him in those days – blue shirt, no tie – very alive. It is not mere filial loyalty that makes me think it far more like Morris than Watts’s picture.’ [8] The asking price was £100 and, after discussion with co-trustees, Richmond dismissed any lower offer: ‘The answer I have to make is that we should prefer to keep the picture rather than sell it for a lesser sum. We feel the honour that acceptance of the National Portrait Gallery confers, and the £100 we suggested was less than we would have proposed to any private person other than a personal friend.’ [9] The Gallery agreed to the price. A year later an attempt was made to obtain a suitable Richmond frame for NPG 1938 and Richmond replied: ‘I fear there are no more frames. So far as I know, all my father’s frames that were spare were sold last year with other things belonging to his studio.’ [10]

Half-length, full-face, wearing a dark jacket over his usual grey-blue working shirt, against a red background.

The artist, by descent to the artist’s son, Sir Herbert William Richmond, by whom sold to the Gallery, April 1922.