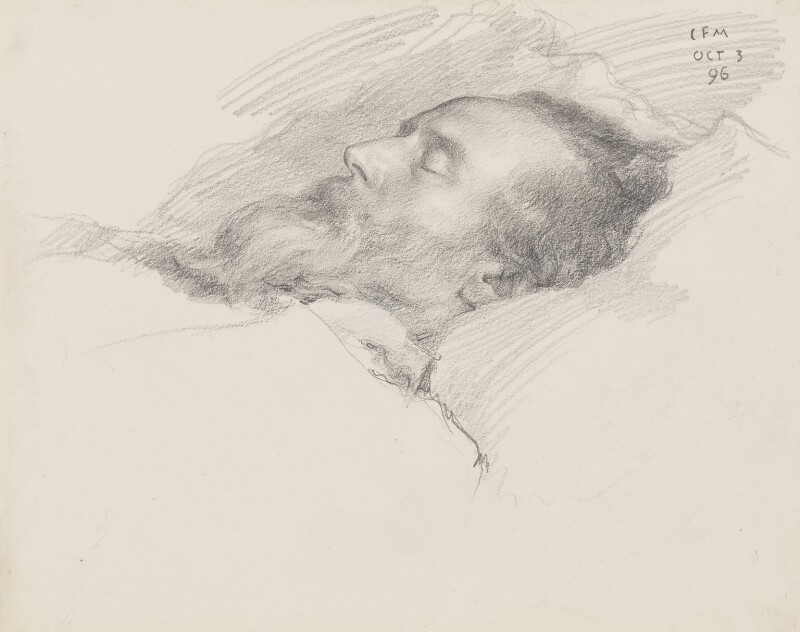 On 24 February 1939 the chairman of the National Portrait Gallery Trustees Sir Evan Charteris wrote to the director: ‘Dear Hake. At our meeting at the Tate Tuesday we were offered & accepted two drawings by Charles Fairfax Murray of William Morris “done after death” – both of lovely quality. I sd we shld be glad of one at the N.P.G. on permanent loan – it was agreed to give effect to this.’ [1] Charteris, who was at that time simultaneously chairman of the Gallery trustees, chairman of the Tate Gallery and a trustee of the National Gallery, was uniquely placed to advise on acquisitions for the national collections.

The drawings in question were two of the three drawings made by Murray of Morris on his deathbed, at Kelmscott House, Hammersmith on 3 October 1896. He died at 11.15 a.m., much emaciated (‘the Disease is being William Morris, and having done more work than most ten men’, according to the doctor); Murray visited later that day with his drawing materials. [2] ‘Fairfax Murray and [William Blake] Richmond made two drawings [sic] of Morris on his death-bed, one of which Murray gave to [Sidney] Cockerell, who was startled to see how little the dead face resembled the living Morris. “The face was singularly beautiful,” Cockerell noted in his diary, “but the repose of it made it more unlike what I had known.”’ [3] Two of the Murray drawings were bequeathed to the Tate by May Morris (d. 1938). The drawing retained by the Tate (see ‘All known portraits, Posthumous portraits, 1896, [c]’) is larger than NPG 3021 and more detailed, a nearly full-face view. The third Murray drawing, which is very close to NPG 3021, was completely untraced until it was discovered by an American living in Paris, Ney Lannes MacMinn, and bequeathed to the Society of Antiquaries in 1967, for display at Kelmscott Manor. [4]

Morris did not pay much attention to his own image (caricatures dominate the iconography, after photographs), and Murray may be called his most regular portraitist. The images he made range from drawings to oil paintings, and from 1870, when Morris was in his mid-thirties, to his death aged 62. As well as the watercolours of 1870 (see NPG 3652) other portraits by Murray include a half-length oil of about that date, recently given to the William Morris Gallery, Walthamstow, London, [5] and another painting, a half-length based on a photograph by Abel Lewis of 1880 (see ‘All known portraits, By other artists, c.1887’), in a British private collection.

The deathbed drawing was accepted from the Tate as a ‘permanent loan for the Gallery’s reference portfolios’ in April 1939, and given an NPG Main Collection accession number. In February 1957 the ownership was formally transferred from the Tate to the NPG. [6]

The Art of the Book: William Morris and After, Fitzwilliam Museum, Cambridge, 1978 (no number).