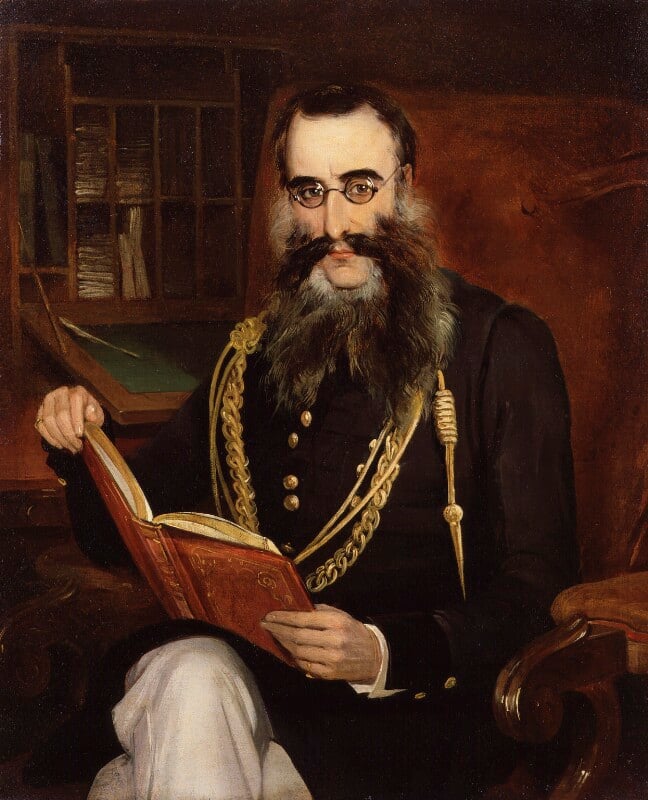 Holland, an assistant at the NPG, sketched this picture on a loose piece of paper, and wrote underneath: 'by Smart/who exaggerated arm-size/Sir Charles Napier at Oaklands.' The second phrase is a later addition. Holland inserted the piece of paper into his notebook beside a drawing of another portrait of Napier by Smart (full-length, seated in his tent), which he had seen at the shop of a dealer, Pforzer, 101 London Wall, in November 1889. What appears to be the same portrait by Smart, or possibly another version, was offered to the NPG in the same month by the daughter of Colonel Rathbone, for whom it had been painted. Two versions of the full-length type are in the collections of A. R. Catherall, and Mrs Kennedy, a descendant of the sitter. It is not clear whether Holland saw the NPG portrait at Pforzer's as well, as he gives no location on the separate piece of paper (he might have seen and drawn the NPG portrait elsewhere, and put it beside the other subsequently for the sake of comparison). Holland's inscription is also ambiguous; it might mean that the portrait was painted by Smart at Oak-lands, the Napier home, or that Holland had seen the portrait there. The significant gap between 'Napier' and 'at Oaklands' would allow for either interpretation. Holland's note adds weight, however, to the attribution of the portrait to Smart, and is therefore of some importance. There is a lithograph by E. Morton, published Colnaghi, after a third portrait by Smart (example in British Museum), showing Napier standing, and holding a telescope; this was said to be after S. P. Smart (fl. 1774-87), but this is clearly impossible on date. While several 19th century Smarts are recorded, it is not clear which if any of them were responsible for the portraits of Napier.

Napier family or Pforzer; E. Kersley, purchased from him, 1955.