3 of 86 portraits of Horatio Nelson 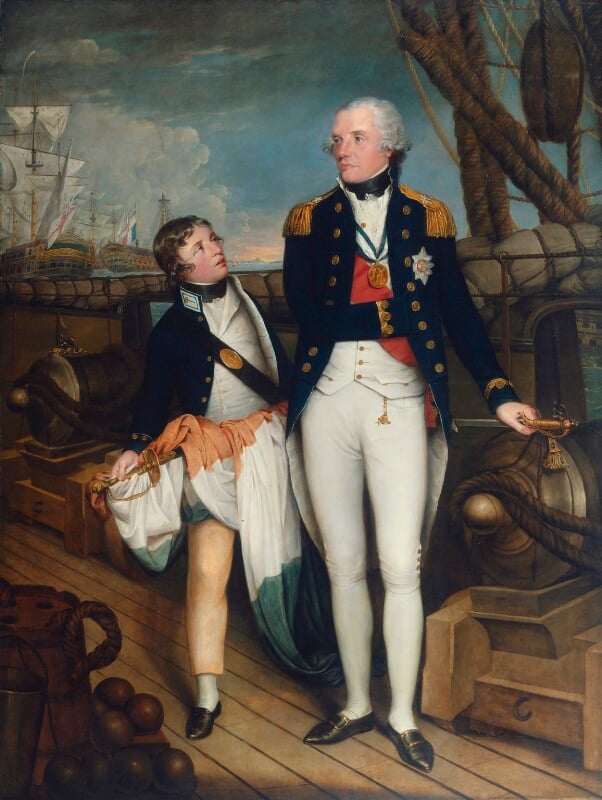 The tablet of the frame inscribed: NELSON Receiving the French Colours at the Battle of the Nile. Painted from Life by HEAD. PRESENTED TO LADY HAMILTON BY LORD NELSON.

Guy Head was working in Naples when Nelson arrived there in September 1798 after the Battle of the Nile. Tradition has it that it was commissioned by King George III but it is more likely that the order came from King Ferdinand of Naples. It was probably begun that winter, shipped to Palermo in December during the evacuation of the Royal Family, and finished there during the spring. On 8 May in a Fleet Order from HMS Vanguard Nelson ordered Captain Burlton of HMS Haerlem to receive on board 'Guy Head Esq. and his family with his pictures, books, prints and other materials, and give them a passage to England, victualling them at two-thirds allowance'. The family arrived in Newcastle in October 1799 but Head's health broke down and he died the next year. Nelson immediately wrote to Lady Hamilton from the San Josef in Torbay: 'Pray have you got any picture from Mrs Head. I hope Mr Brydon has executed the frames to your satisfaction; the bill he is directed to send to me' (letter of 8 February 1801, Sir Harris Nicolas, Nelson's Dispatches and Letters, IV, pp 284-5). No doubt it hung at Merton but at Lady Hamilton's flight to exile in Calais it was taken over by Alderman Smith and at the death of his widow acquired by Richard Phillips, an upholsterer of Golden Square, who offered it to the newly formed NPG - 'this picture together with portraits of Lady Hamilton, the King and Queen of Naples and Sir William Hamilton came from Merton and passed through the hands of Mrs Smith' (letter in NPG archive). It was declined by the Trustees and Phillips put it up for sale at Christie's 13 July 1860 where it was bought by Edward & Adolphus Radclyffe of Pall Mall who sold it to John Finlay of Moss Park (Scharf's sketch in Sir George Scharf’s Trustees’ Sketchbooks, 1196). It remained in the same family collection, with an interval on loan to Glasgow 1916-20, until sold at Sotheby's 14 July 1976 (104) and bought for the NPG.
Guy Head's scene is fanciful of course. The Battle of the Nile was fought during the darkness of an August night; the French Admiral's sword was brought to Nelson shortly after midnight, not by a midshipman but by the Vanguard's First Lieutenant; and Nelson himself had been wounded above his right eye, was bandaged, bloodstained, exhausted and a long way from the polished officer at ease on Guy Head's quarterdeck. The identity of the midshipman is not known. Admiral Blanquet's sword together with Nelson's letter presenting it to the Lord Mayor of London is in the Guildhall library.

Whole-length standing on the deck of HMS Vanguard with a midshipman. Nelson wears rear-admiral's undress uniform, white waistcoat and breeches, black neckcloth, white shirt-frill, black shoes with gold buckles, two gold seals on a gold chain at the waist, Ribbon and Star of the Bath, one Naval Gold Medal (St Vincent) on a white ribbon with blue borders; his left hand holds sword-blade and rests on the breech of a carronade, his right sleeve empty and pinned across the Bath Ribbon; blue eyes, grey hair in queue, florid complexion, serious expression.
The midshipman to left in blue coat, buff trousers, white waistcoat, black sword-band with gold anchor badge over his right shoulder, holds the French Admiral's sword partly wrapped in a captured French ensign.
Aboukir Bay in the background holds two battle-scarred ships flying white ensigns hoisted over French tricolours; a pilot cutter in the harbour flies a tricolour; blue sky with storm clouds to left.

Commissioned probably by the King of Naples and given by Nelson to Lady Hamilton. Alderman Joshua Smith and his widow's sale, bought Richard Phillips. Christie's 13 July 1860 (238-41) bought Radclyffe. John Finlay of Moss Park and by descent to his grandson Robert Munro and his daughter Mrs Maria Maclaren and her son I. G. Maclaren who sold it Sotheby's 14 July 1976 (104) bought Leggatt on behalf of the NPG.