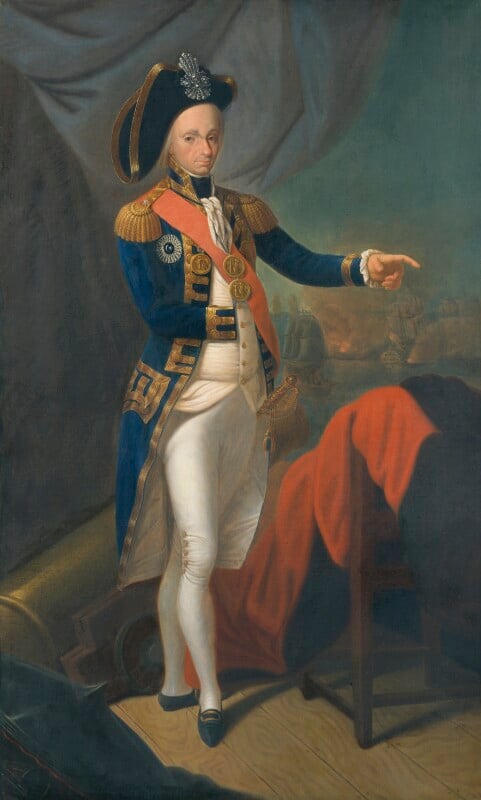 The several Guzzardi portraits stem from the magnificent gifts sent to Nelson by the Grand Sultan Selim III after the Battle of the Nile. Leonardo Guzzardi is a shadowy figure who, apart from the Nelson portraits, appears to be totally unrecorded; not even in Naples or Palermo are there other portraits by him. He was probably an artist attached to the Neapolitan Court and after the evacuation of the Royal Family to Palermo in December 1798 was commissioned either by Sir William Hamilton or by Nelson himself to paint the hero's portrait.
The first version, a life-sized whole-length now in the Admiralty Boardroom, is signed and dated on the rim of the targe lower left: LEONARDUS GUZZARDI PINX. PANORmi 1799 - the only clue to the artist's identity and showing him at least to have been a native of Panormus, the modern Palermo. This portrait was given by Hamilton to his nephew Charles Greville and ceremoniously hung in the assembly room of the Packet Hotel owned by Greville in Milford Haven. It was rescued from there when the Admiralty Boardroom was being decorated in order to match Beechey's portrait of William IV acquired in 1847, and replaced in the hotel with a copy now at Dartmouth.
Guzzardi was commissioned to paint several replicas to be distributed among the family and friends and the members of the 'band of brothers', the Captains of the squadron at the Nile who at a special muster aboard HMS Orion two days after the battle had resolved to present him with a sword, its hilt shaped as a crocodile, and to 'permit his Portrait to be taken ... at the first opportunity' (Sir Harris Nicolas, Nelson's Dispatches and Letters, III, p 67). Several of Guzzardi's copies are known, all characterised by emaciation of the features caused by Nelson's ill-health at the time, and by the angle of the cocked hat with the chelengk tilted back on the forehead to avoid contact with the wound over his right eye sustained on the night of the battle itself.
One of these copies, differing slightly in the prominence given to the Turkish Order of the Crescent, was dispatched to Constantinople with a fulsome letter of gratitude to the Sultan for the chelengk, the sable pelisse and several other gifts. Here, many years later it was seen by Sir Charles Dilke in the Turkish Treasury. Dilke's efforts to secure the original were met, very properly, by the Sultan's refusal to part with so historic a treasure which can still be seen in the Dolmabahce Palace near Istanbul. However the Sultan agreed on a generous compromise instructing a local Italian copyist, Acquarone, to paint a replica which was set in a magnificent frame and presented to the British Government with due ceremony in 1888.

Whole-length standing in rear-admiral's full-dress uniform, cocked hat with chelengk, worn tilted back on the forehead, Star of the Crescent and Davison's Gold Medal both worn on his right breast, Ribbon and Star of the Bath on his left, two Naval Gold Medals (St Vincent and the Nile) on blue and white ribbons at his neck; on deck in front of a carronade beside a chair draped with the scarlet sable-lined pelisse given by the Sultan with the chelengk; lower left corner a helmet, round shot and a targe; his right sleeve fastened below the Bath Ribbon; left hand points to the Battle of the Nile raging in the right background; blue draperies to left; his eyes greyish-blue, complexion a pale pink.

Presented by His Imperial Majesty the Sultan Abdul Hamid II in 1888.