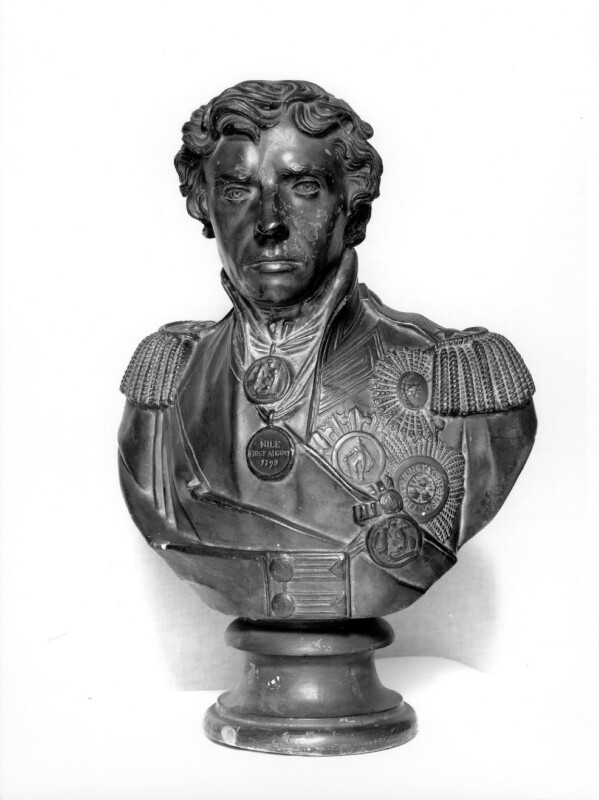 Incised on the back D. Cardosi.

While Nelson was being fêted in Vienna in August-September 1800 and giving sittings to Füger for an oil painting (see NPG 73) he also sat to the sculptor Franz Thaller, probably submitting to the undignified process of a life-mask (Walker, Mariner's Mirror, November 1980). The finished marble bust is in the National Maritime Museum, incised on the back: Franz Thaller et Matthias Ranson/Viennae Aust. MDCCCI; it was shipped to England shortly afterwards and appears in Edridge's drawing of Lady Nelson. Copies were turned out in large numbers by Turnerelli, Nollekens and other sculptors, and Flaxman clearly based his memorial in St Paul's Cathedral on the Vienna bust. Cardosi, an otherwise unrecorded sculptor, followed the Vienna bust closely with slight variation in the treatment of the hair. Another version is in a private collection in Dorking.

Head and shoulders turned slightly to his left in rear-admiral's full-dress uniform, Ribbons of the Bath and the Crescent, Stars of the Crescent (above), St Ferdinand (left), Bath (right), two Naval Gold Medals in front (St Vincent and the Nile, the Nile Medal in reverse incised: NILE/FIRST AUGUST/1798), below the Stars another Gold Medal displaying the Victory and Britannia but probably intended to represent Davison's Nile Medal, officially not uniform; the empty right sleeve fastened straight across, the two naval gold buttons at the cuff worn horizontally.