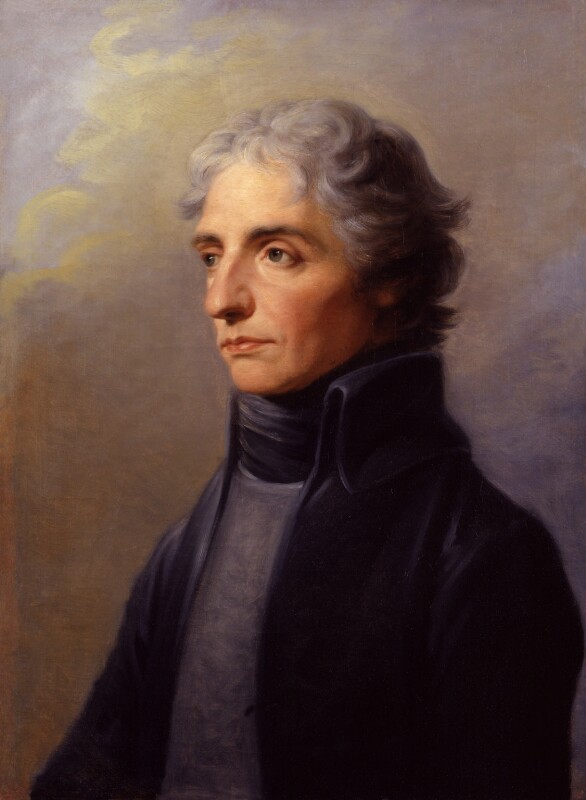 Both Nelson and Lady Hamilton sat to Füger shortly after their arrival in Vienna from Naples on 19 August 1800. NPG 73 is probably Füger's first attempt showing Nelson informally in a dark blue coat and neckcloth and a light blue jersey. It was later improved and worked up into the principal version now at Portsmouth in rear-admiral's full-dress uniform and the insignia of the three Orders of Chivalry, the Bath awarded after the Battle of Cape St Vincent, the Turkish Crescent awarded after the Nile, and the Neapolitan Order of St Ferdinand and Merit awarded by the King of Naples barely three months before the sitting. The two Naval Gold Medals hang from his neck but there is no sign of Davison's private Nile Medal. The NPG version is the only known image showing Nelson out of uniform; it also varies from the Portsmouth version in the colour of the eyes which are grey in NPG 73 and greenish-blue in the other, though in neither is there any sign of the membraneous film over the right eye caused by the wound at Calvi and noticed by most other artists. For a further analysis see R. J. B. Walker, The Nelson Portraits (forthcoming).
Versions: Miniature oval version or copy belonged to Sir Edmund Gosse in 1887; a version with the addition of uniform, orders and stars, is in the Royal Naval Museum, Portsmouth.

Painted in Vienna and in the artist's studio till his death in 1818; the artist's son till 1823; Moritz von Tscheffen till 1859; Ewer Gallery, Oxford Street, London, from whom bought by the NPG in 1859.

No contemporary engraving is known until an oval cut was published in Illustrated London News, Supplement, 30 September 1871.