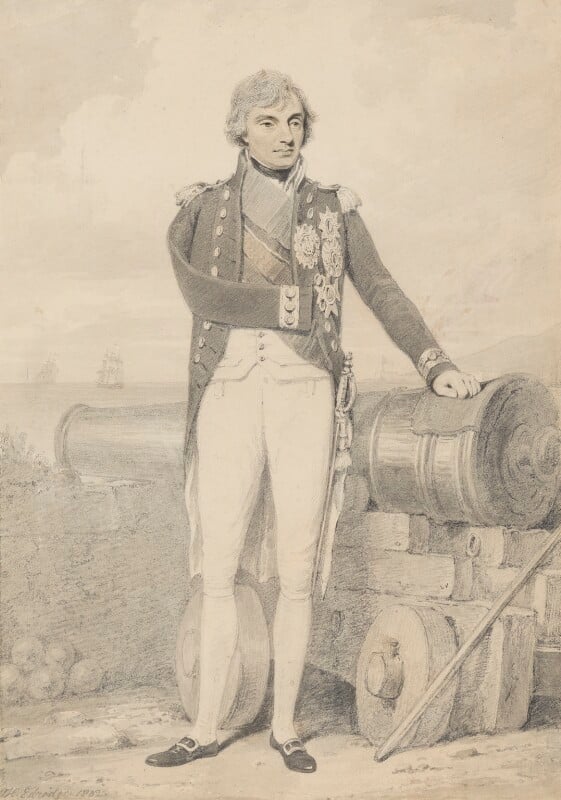 Edridge painted Nelson on two occasions, the first after the Santa Cruz action during his recuperation in the Bond Street lodging late in 1797. This was commissioned by Sir Henry Englefield, exhibited RA 1798 (545) and now belongs to the Royal Naval School, Holbrook. The second was drawn in 1802 and is NPG 879. It originated with a request from Richard Bulkeley, an old comrade from the Nicaraguan expedition of 1780, who wrote to Nelson on Christmas Eve 1801 asking him to sit for Edridge once again - 'two sittings will be sufficient if you have patience to sit an hour each time, and three if you can't confine yourself to a chair for such a length of time in one day ...' (Alfred Morrison, The Nelson and Hamilton Papers, II, p 181). The appeal was successful and the next record appears in Farington's Diary, 6 August 1802 noting Edridge's presence at Merton with the Hamiltons and Nelson himself.
The drawing was probably made then but by the end of August Bulkeley was complaining that he had not received it. 'Sir, My Lord Nelson who is with me, has expressed surprise at not finding the excellent portrait which you have been so successful in, and he apprehends that you have mislaid my address ...' (letter from Bulkeley to Edridge 29 August 1802, unpublished but MS in library of Stoke-on-Trent Museum and Art Gallery). It is not known whether this well-worn device was successful and whether Bulkeley ever received his drawing. Edridge, who often made copies of his work, usually kept the original as a master-copy, and the NPG drawing which has descended through the Edridge family is almost certain to be one of these studio copies. Two other versions exist, in the Royal Naval Museum, Portsmouth, and in a private Hampshire collection, both almost identical to NPG 879. The delay in sending off Bulkeley's copy was probably due to the original's being in the hands of Anthony Cardon for engraving.

Whole-length standing by a cannon mounted on a trunion, its muzzle resting on a defence wall and covering a harbour possibly intended to represent Bastia or Calvi; vice-admiral's full-dress uniform, Ribbons and Stars of Bath (above), St Ferdinand and Merit, the Crescent, and St Joachim received in June 1802; no Naval Gold Medals. The head is more closely finished than the remainder, the hair rather wiry in texture.

The artist, then to a descendant ('Edridge was my Grandfather's uncle') Mrs Isabelle Mitchell (née Wilkinson) who sold it to the NPG in 1891.

Stipple by Anthony Cardon published in 1802 and again in half-length as frontispiece to Clarke & McArthur's Life of Nelson, octavo edition 1810.