1 of 2 portraits of William Eden Nesfield 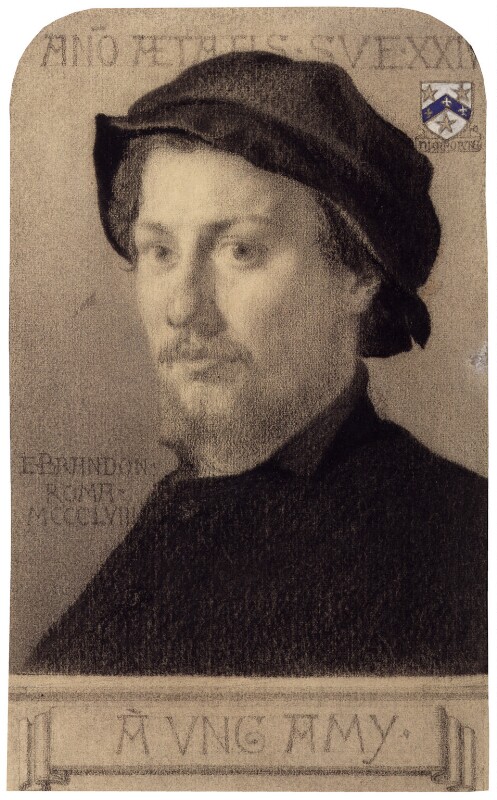 Jacques Émile Édouard Brandon, named Jacob-Émile-Édouard-Pereijra but signing himself ‘Edouard Brandon’, was born in Bordeaux, of Sephardic Jewish descent. He studied at the École des Beaux-Arts, Paris, and under Jean-Baptiste Corot, before going to Italy between 1856 and 1863; among the circles of expatriate students in Rome he made friends with Edgar Degas. [1] Brandon’s earliest Salon exhibits were Christian subjects, notably a series for the Oratory of St Bridget in Rome; [2] in the 1860s, however, he also began to develop specifically Jewish themes. He helped raise awareness of the Jewish heritage in France, much as Simeon Solomon did for Jewish cultural consciousness in England. [3]

Nesfield was a part of those student circles in Rome. Brandon portrays him in a historicizing image, with a coat of arms (intended to be that of Nesfield in Yorkshire) and, below the bust, a label inscribed ‘À VNG AMY’, celebrating their friendship. The drawing style is consciously Italian, the chalk lightly rubbed in imitation of sfumato. The choice of fancy dress, and the courtly conceit, reference the two men’s interests in the early modern period: Nesfield’s studies of continental medieval architecture, [4] and Brandon’s own work on the fourteenth-century Saint Bridget.

Nesfield later designed the frame for the drawing and labelled it on the reverse: ‘This portrait was taken in Rome by my friend Brandon the French artist – I think a prix de Paris man – a friend also of Val Prinsep. / We found ourselves in Rome in 1858 1859 – ung Bon amy / W. Eden Nesfield’. The original mount incorporates an arched gold surround, and the frame is a thick, reeded design, painted black. After his death Nesfield’s widow presented the portrait to John Hebb, who had been to Rome with Nesfield. [5] In 1899 Hebb, then architect to the London County Council, presented the drawing to the National Portrait Gallery. [6] He objected vigorously to a Gallery proposal to replace the original frame with a new gilt one. [7] Hebb wrote an article on W.E. Nesfield for the RIBA Journal, May 1903, in which he refers to this drawing.

1) Through this connexion Brandon exhibited for a single time with the Impressionists in 1874.
2) Brandon’s one exhibit at the RA (1870) was St Catherine of Sweden prays over the body of her mother, St Bridget.
3) His work was not included in the Exhibition of Jewish Artists in 1907. See Tumarkin Goodman 2001, p.170, passim, for Brandon’s status as a Jewish artist.
4) Nesfield’s studies culminated in an influential book, Specimens of Medieval Architecture chiefly selected from examples of the 12th and 13th centuries in France and Italy and drawn by WE Nesfield, architect, London, 1862.
5) Probably the portrait ‘in the possession of his widow’ (DNB, 1894).
6) ‘This drawing was made in Rome in the winter of 1859 [sic] by Jacob Emile Edouard Brandon a distinguished living French artist. There is an inscription on the back of the frame in Mr Nesfield’s handwriting. The frame is the original frame designed by Mr Nesfield. The coat of arms in the drawing is incorrectly blazoned, The arms of Nefield or Nesfield (Co York) are Argent a chevron between three mullets sable. Crest a pillar argent, supported by two lions paws, proper. A lithographic [sic] reproduction of the Portrait the size of the original appeared in the Architectural Review vol. IV, p 64. The portrait was given by Mr Nesfield’s widow to Mr John Hebb FRIBA who was Mr Nesfield’s fellow student in Rome by whom it was presented to the National Portrait Gallery’: notice in NPG RP 1193. See Architectural Review, vol.4, 1898, p.65.
7) Letter from John Hebb [to Lionel Cust], 19 Apr. 1899, NPG RP 1193.

Master Drawings from the National Portrait Gallery, London and seven other venues, 1993–4 (63).