2 of 2 portraits of William Eden Nesfield 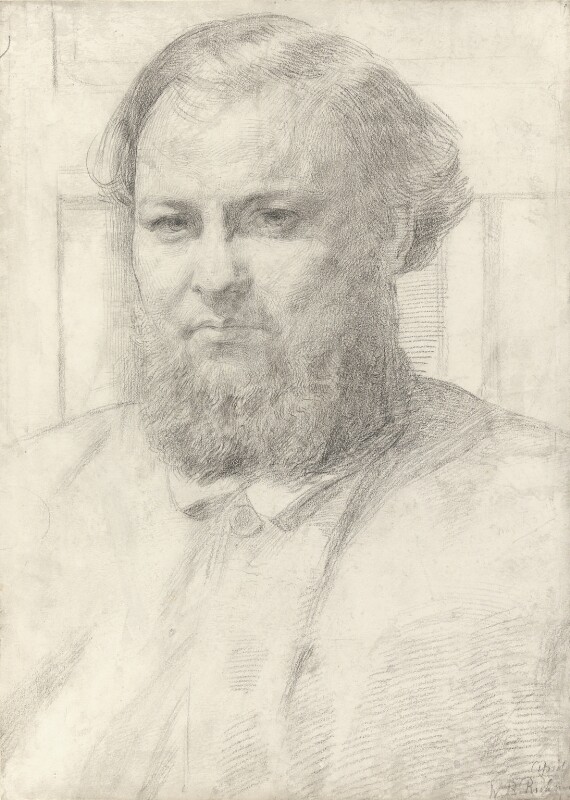 This portrait of Nesfield was found by the donor, E.G. Millar, ‘many years’ before he offered it to the National Portrait Gallery;[1] William Blake Richmond was still alive and Millar was able to show it to him. Richmond thought he had ‘probably’ drawn it in 1859,[2] but it is now generally considered to be later, c.1865.[3] The portrait certainly accords with Swinburne’s description of the architect in 1863: ‘A fat, jolly, hearty fellow, genuinely good natured, very fond of smoking and, I deeply grieve to say, of women.’[4] The drawing is signed and inscribed ‘April’. There are no details regarding the commission, or of relations between the two men (Nesfield was seven years older), but they were both friends of Albert Moore and moved in similar circles.

In the early 1860s Richmond was producing portraits in a style influenced by the Pre-Raphaelites. The life-size drawing of Nesfield is actually more freely drawn than many of these works, and effectively conveys the sensuality and hubris of his personality: ‘Among [Nesfield’s] strongest characteristics’, wrote the architect John Hebb, ‘were his singular uprightness and a sturdy independence in his bearing towards his clients. He could never be persuaded that he was the servant of an employer, and treated him in something of the same manner that Michelangelo assumed to Pope Julius – as a friend and patron and nothing more.’[5]

Nesfield’s iconography is small, and Richmond’s drawing is the only non-photographic portrait to show him in his prime.

Head-and-shoulders, almost three-quarters to left, against a panelled background.