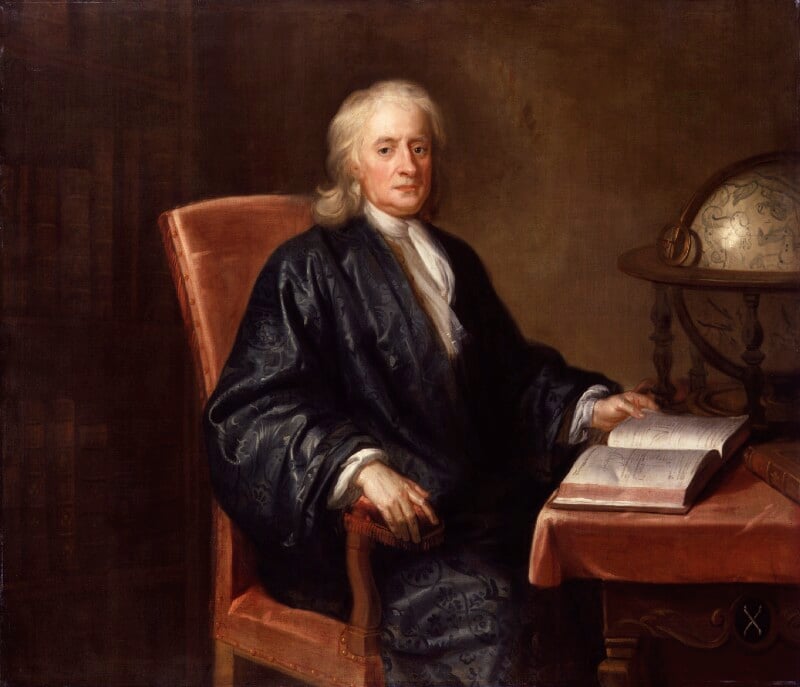 The Principia depicted is the 3rd edition published in 1726, and shows pp 204-05 (‘Propositio LXXXI, Problem XLI’). [1]
A portrait of Newton at the very end of his life. The head derives from a bust-length portrait in Trinity College, Cambridge, inscribed Isaac Newton 1726, presented in 1761 by Thomas Hollis, and engraved in 1760 by Macardell as after Seeman. [2] Newton’s right hand is very poorly painted.
There are a number of versions showing Newton seated at table with the Principia, including: [3]
a) Linley Hall, Salop., the Principia showing a diagram from p 299 of the 3rd edition; wearing a blue gown, the red carpet draped over the table [4]
b) Trinity College, Cambridge, and previously with Frances, Lady Harley (d. 1849), [5] wearing a blue gown, the Principia showing pp 256-57 of the 3rd edition. An abbreviated version of the Linley Hall portrait without the globe
c) Grace K. Babson collection, Babson College, Babson Park MA, displayed in a reconstructed interior of Newton’s house in St Martin’s Street, London, where he lived 1710-25; resembling the Trinity portrait with the addition of the globe. [6]
In these portraits the folds of Newton’s gown, the chair and the size and position of the open Principia resemble those in NPG 558, but they do not show the bookshelves on the left, Newton’s coat of arms on the table, or the rich pattern on his gown, making NPG 558 the most elaborate image; Keynes suggests it may have been commissioned by the Newton family.
Each of these portraits was very probably posthumous, [7] and on the evidence of the Trinity bust-length, all should be attributed to Seeman or his studio. NPG 558 was probably a studio production since it is perhaps the weakest in execution, despite the precise attention to detail. Previous attributions of NPG 558 and b) and c) above to Vanderbank [8] may be discounted on comparison with the Vanderbank portraits of 1725 and 1726.
Enamel copies of NPG 558 were made by H. P. Bone in 1846, 1847 and 1851. [9] An unattributed bust-length miniature belongs to the American Philosophical Society, Philadelphia. [10]

Ellis 1843
Sir Henry Ellis, List of Portraits suspended on the Walls of the Eastern Zoological Gallery, British Museum, 1843, no.69.

1 Celebrated Clerk to the House of Commons.