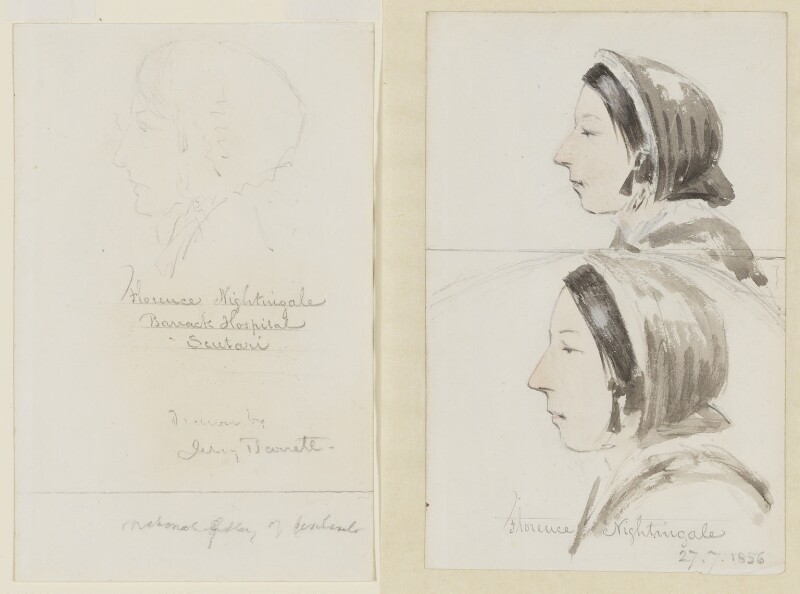 To ensure the success of his second Crimean picture Jerry Barrett knew he must go the extra mile. For the first picture, Queen Victoria’s First Visit to her Wounded Soldiers, 1856 (NPG 6203), he had been praised for the truthfulness of the portraits, sketched as ‘the affecting incident took place’ at the Brompton Hospital, Chatham. [1] To succeed with the next subject – Florence Nightingale nursing soldiers at the Barrack Hospital, Scutari – he would have to go to Turkey, and soon, as a peace treaty had been signed on 30 March and the troops were being transported home.

Barrett went in the knowledge that Nightingale ‘had refused everybody, and would not allow her likeness to be taken’. [2] He travelled with a friend, Henry Newman, one of whose jobs was to smooth Barrett’s path: ‘I am fully employed in attending on Jerry and making an occasional sketch,’ he wrote from Scutari. [3] So Newman distracted Nightingale in the Scutari studio while Barrett drew her; as Newman’s nephew later wrote, ‘Florence Nightingale, though unwilling to sit, did show interest in the picture [see NPG 4305], and its progress. During her visits while she was enjoying not only Henry Newman’s graphic and beautiful sketches, but also his own interesting personality, Jerry Barrett was quietly occupied in making careful sketches of her which proved invaluable.’ [4]

The profiles in NPG 3303 were also obtained opportunistically. The date recorded in Barrett’s inscription ‘27.7.1856’ was the eve of Nightingale’s departure, by which time she and the artist were surely off speaking terms; she looks cross and tired, and Mark Bostridge suggests the images were sketched as she walked by the harbour. [5] Confusingly, the profiles were discovered in Newman’s sketchbook – perhaps Barrett grabbed it at an unexpected opportunity. Examination of Newman’s Syria and Palestine sketchbook at Friends’ House Library, London, confirms that the Nightingale profiles in NPG 3303 are indeed by Barrett, as Newman’s drawings were never so bold or confident; notations on these pages are, however, by both men.

The National Portrait Gallery was offered the sketches as a gift by Newman’s granddaughter in January 1946:

Herewith enclosed two sketches of Florence Nightingale, found in the sketch-books of the late Henry Newman. He & his artist friend Jerry Barrow [sic], went to Scutari & they found, it is said, the greatest difficulty in getting a sketch, as the lady was not interested. Donor is the late Miss H.T. Neild granddaughter of Hy. Newman. [6]

The Gallery was interested, and wanted to know if the drawings were by Barrett or Newman. The reply was inconclusive:

The story goes that Flo Nightingale disliked the idea of having her portrait taken, but Jerry Barrett got the sketches done while Henry Newman exerted his personal charm on the lady & diverted her attention from J.B.’s activities. The sketch on the back of the two heads is by Newman – so I cannot tell – & no one seems able to make a positive statement. [7]

The Nightingale sketches came on two little sheets: one with two watercolour profiles and the other with a pencil profile outline. They were accepted in February 1946 as ‘probably’ by Jerry Barrett and given a single accession number, NPG 3303. [8] The profiles bear no relation to the portrait of Nightingale in The Mission of Mercy (NPG 6202), which Barrett finished painting in 1857.

Left-hand sheet: head, pencil outline, profile to left in bonnet. On reverse: sketch of man with box on back.
Right-hand sheet: two heads (one above the other), pencil and watercolour, profiles to left, pinkish nose and short hair under grey bonnet with lace and ribbons. On reverse: watercolour landscape by Henry Newman.

Henry Newman; by descent to Miss H.T. Neild, by whose wish given to the Gallery, February 1946.