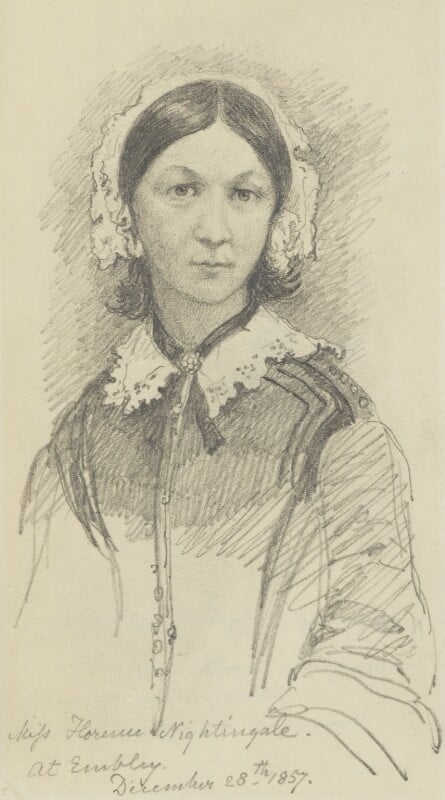 At first sight this drawing by George Scharf, a penetrating study of Florence Nightingale, seems secure in terms of identity, place and time. The head is finely pencilled, lifelike and expressive, and the sheet clearly inscribed: ‘Miss Florence Nightingale. / At Embley. / December 28th 1857’. According to his diary Scharf spent Christmas 1857 with William and Fanny Nightingale at Embley Park, during a tour of Hampshire. [1] Earlier that year he had been nominated the first secretary of the National Portrait Gallery.

But Florence was not at Embley that Christmas. Still ill from a serious collapse in August, she was living in deliberate seclusion at the Burlington Hotel in London, forbidding family visits, saving her energies for work. In January 1858 she wrote to her mother, hinting regret at the distancing: ‘If I could give companionship or receive it, I would beg you to come and share it with me.’ [2]

Scharf stayed with the Nightingales from 24 to 29 December 1857. [3] During this time he made two careful records, one of a painting in the house, [4], the other of a recent photograph of their famous, absent daughter. [5] (Florence disliked the photograph, joking it made her look like Medea after killing her children. [6]) An inscription at top right, no longer visible, indicated that the portrait was drawn between 26 and 28 December. [7]

Many years later, in 1917, in the course of examining Scharf’s immense bequest to the Gallery, the Nightingale portrait was discovered on page 49 of his Sketch Book 50 and, after consultation with the Trustees, it was accessioned, snipped out and framed for public display:

The Director reported [to the Trustees] that he had lighted upon a pencil drawing obviously done from life, by Sir George Scharf at Embley on December 28th 1857, of Miss Florence Nightingale, that he had written to Sir Edward T. Cook, her biographer, and asked permission of the Trustees, should the drawing prove to have been taken from life, to remove it from the sketchbook and have it suitably framed for exhibition in the Gallery. The Trustees were much interested in the discovery of this most valuable record of Miss Nightingale’s features, and approved of the Director’s suggestion. [8]

How quickly it was realized the drawing was not from life – and thus in contravention of the Gallery’s acquisition policy – is unclear; it was anyway welcomed by the Trustees, and entered the Primary Collection as NPG 1784.

Nightingale’s descendants when informed of the ‘discovery’ were also pleased, adding rather poignantly: ‘We have always regretted very much that there was not a more satisfactory picture of Miss Nightingale in the Gallery, and that there really has been no portrait of much value that any of us could offer.’ [9] From the moment of its discovery it was recognized that Scharf’s exquisite drawing was a curiosity, and a significant addition to Nightingale’s iconography.

Double Take: Comparing the Art of Graphic and Photographic Portraiture, NPG and nine other venues, 1991–4.