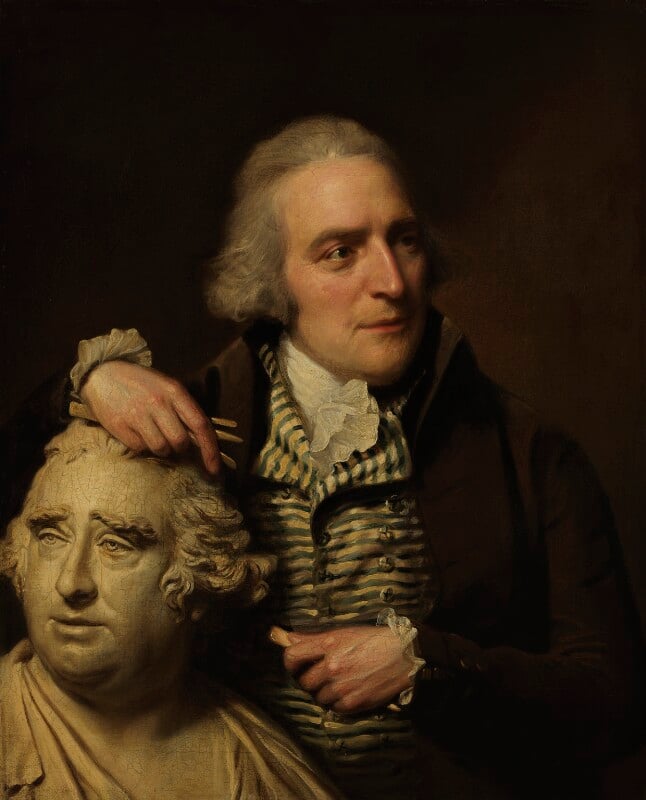 In this portrait Nollekens appears aged about 60. He wears the striped Manchester waistcoat described by J. T. Smith (J. T. Smith, Nollekens and his Times, 1920, I, p 73) and is engaged in modelling the bust of Fox of which the terracotta is NPG 139; marble versions are incised: Aet. 43 and one is dated 1791 (Lord Fitzwilliam's exhibited Kenwood, 1959, no.18). Although acquired as by Zoffany the attribution was quickly returned to Abbott on the basis of Vendramini's engraving. Abbott sat next to Nollekens at a Royal Academy dinner on 4 June 1798 (Farington's Diary) becoming insane shortly afterwards (A. C. Sewter in Connoisseur, CXXXV, 1955, p 179) though he continued to paint certainly until 1800. His portrait of Nollekens with the bust of Fox derives closely from the earlier picture with the bust of Sterne painted by Rigaud in the winter of 1771-2 and much admired by Nollekens himself who 'continued to be pleased with it even to his second childhood' (J. T. Smith, Nollekens and his Times, 1920, I, p 8).

Given by the Right Hon Henry Labouchere MP in 1858.

Stipple by Vendramini from a drawing by Evans 'From an original Picture by F. ABBOT in his own Possession', published by Cadell & Davies in Contemporary Portraits, 21 October 1816.