1 of 53 portraits of Constantine Henry Phipps, 1st Marquess of Normanby 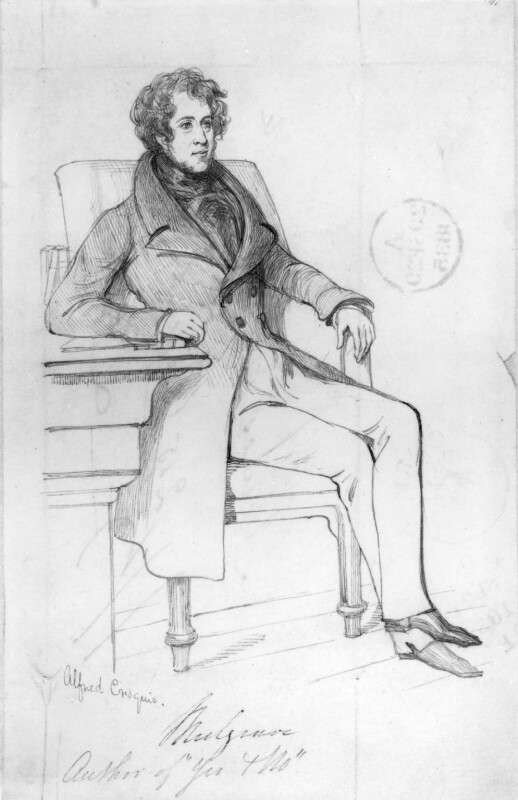 Signed with the artist's pseudonym (lower left): Alfred Croquis
Sitter's autograph below: Mulgrave
Inscribed below in pencil in another(?) hand: Author of "Yes & No".

This is the finished drawing for the engraving of Normanby by Maclise (they are almost identical; the autograph appears in the engraving, but not the signature), published Fraser's Magazine, XII (November 1835), facing 540, as no. 66 of Maclise's 'Gallery of Illustrious Literary Characters'. Another more sketchy pencil study is in the Victoria and Albert Museum. The NPG drawing was sent to the publisher of the magazine, James Fraser, through the post; on the reverse are various postmarks, 'Cork, 23 or 25 Sept. 1835' (twice), and 'A 29 Sept. 1835', and the address of 'James Fraser Esqre/215 Regent Street/London'. Maclise had come originally from Cork, and must have been revisiting the city in 1835; it is not known whether the drawing itself was executed in Cork. Maclise's eighty or so caricatures of contemporary writers in Fraser's Magazine, accompanied with word sketches by William Maginn, the editor, were one of the chief attractions of the magazine in its early days. Most of the studies and finished drawings for this series were sold after the artist's death, Christie's, 24 June 1870, in large uncatalogued lots.

Possibly included in the artist's sale, Christie's, 24 June 1870; Appleby Brothers, purchased from them, 1943.