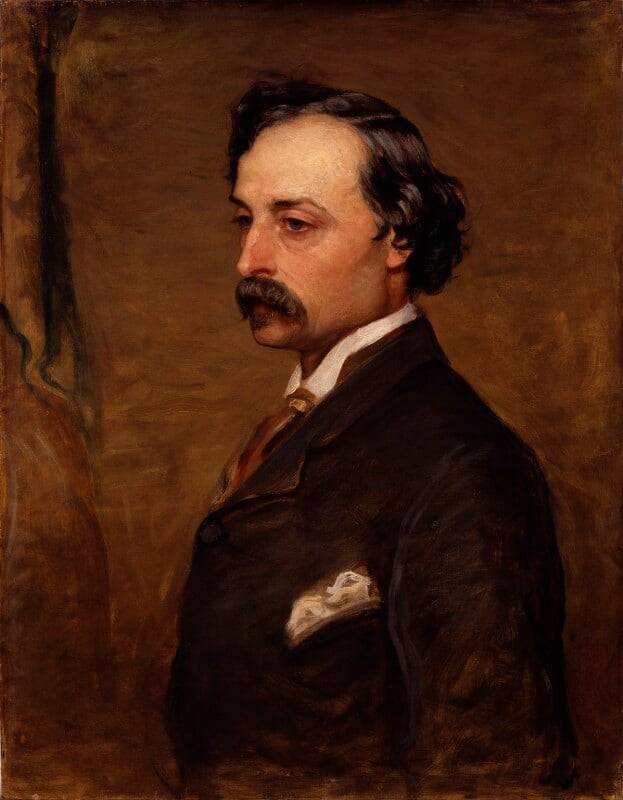 Both artist and sitter were known as society portraitists, and both had homes in east Kent: Orchardson at Westgate-on-Sea from 1877 and Weigall near Ramsgate from 1879 to 1890. According to the sitter’s daughter, ‘Mr Weigall, the amateur painter [sic] also came over frequently from near Ramsgate; besides playing tennis he painted Orchardson’s portrait sometime or other, which was very like, but had no great merit as a work of art.’ [1]

She further suggested it had been a wedding present, but the Orchardsons married in 1873 and the canvas is from a later date. It does appear to have been a gift, however, as it is not recorded in Weigall’s sitter book. [2]

It may have been executed in Weigall’s studio in Ramsgate, or that in London. [3] The canvas came from the firm of William Badger, trading from 97 Boundary Road, St John’s Wood and 49 Dorset Street from 1877–8.

Henry Weigall was an accomplished and relatively well-known artist (see also his portrait of Sir Moses Montefiore, NPG 2178), but when the present work was acquired, his authorship had been forgotten. In November 1937 his son, J.W. Weigall, gave the information to the National Portrait Gallery, suggesting that the portrait dated from between 1876 and 1881. He added that Weigall was ‘a great friend of Orchardson’s and had a house at Westgate [sic] where Orchardson also had a house during this time’; moreover, his oldest brother ‘had a recollection of Orchardson sitting to his father’.[4]

With sitter, his widow and daughter, from whom purchased by Robert Duncan of Glasgow, from whose executors purchased 1926.