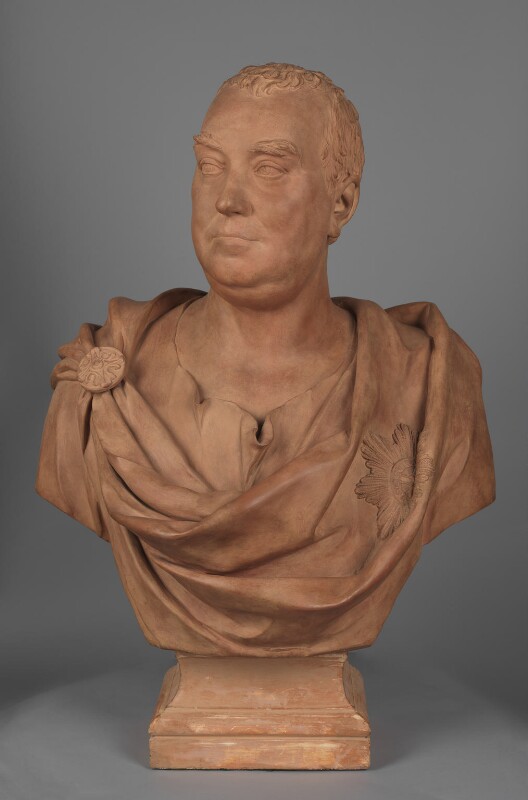 Incised and dated on the back: Mich: Rysbrack/1738.

A bust by Rysbrack 'modeld from the life ... a large head, broad face' with Garter and Star was noted by Vertue in 1726 [1] and the arrival of a marble, still in its original place over the chimney piece at Houghton, [2] was reported in the Norfolk Gazette of 19-24 December 1730: 'a few Days since a curious Busto of the Rt Hon. Sir Robert Walpole, done by Mr. Risbach, the famous Sculptor, was sent to Sir Robert's Seat at Houghton ...'. [3] A retrospective list of ‘Models seen when done [of] many Nobleman Ladies & Learned men & others', recorded by Vertue in 1732, included 'Sr. Robt Walpole - Marble’ [4] and under the heading ‘Memorial 1738/9 of Persons Arts and living Artists' is 'a portrait Bust Model of Sr. Robert Walpole. done by Mr Rysbrake very much like him and approovd of -'. [5]
Since he refers to the Garter and since the marble at Houghton also has it, what Vertue saw in 1726 is presumably the prototype. [6] It might be thought that the use of the word 'Model' in 1738/9 implies a second sitting, but this is not necessarily so, as NPG 2126, dated that year, is identical with the Houghton marble. Indeed, it might even be the clay model of 1726 subsequently fired and dated, or a replica.
‘A Medal of Sr. Rob' Walpole profil ... by L. Natter', mentioned by Vertue in 1741, derives from the Rysbrack bust; the reverse shows 'the statue of Marc Tullius Cicero - standing in the habit of Senator. or Orator ...'. [7] Another has ‘Britannia trampling upon Envy'. [8] Rysbrack designed, or possibly made, other medals and medallions of Sir Robert and Lady Walpole, for his sale catalogue, Langford's, 24-25 January 1766, lists under models in terracotta: 'Two [Medals] of the late Right Hon. Sir Robert Walpole, Earl of Orford, and his Lady', lot 14; both are now missing. [9] A grisaille profile ascribed to J. de Wit, perhaps taken from the Rysbrack, was at Sotheby's, 1 November 1961, lot 10.

A small circular hole (vent?) in the crown of the head; a crack in the back of his left shoulder and firing cracks; some repairs carried out, 1926; contemporary plaster infilling, the whole painted near terracotta colour as was the sculptor's custom. In a letter to Sir Edward Littleton, 6 May 1758, he explains: ‘Small Cracks unavoidably Caused by the Burning, which Are obliged to be stopped with Plaster of Paris; which the paint Strengthens and Makes the whole of one Colour', ... [the] Gloss ... will Go off in time'. [1]

Bought, 1926, from H. W. Radford of Hounslow; found by him (and identified by Mrs Esdaile) in the library of Norwood House, Middlesex, which had been empty for thirty years before being pulled down c.1926; earlier history not known. [1]