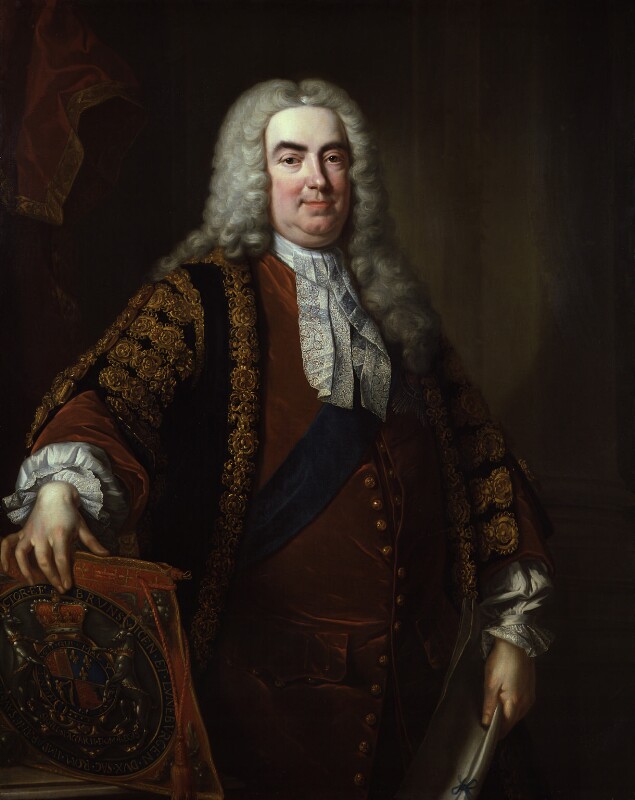 Inscribed on the back of the relining canvas: this Portrait of Sir. Robert Walpole (Earl of Orford) was/painted for Lord Bessborough by I. B. Vanloo in 1740 &/given to Lord Walpole by Lord.B. 1785.

Vertue, 1738, refers to a portrait by Vanloo whose 'great Success is likenes, naturaly without flaterry - or raising the character. but in that its remarkable that Sr. Robert Walpole and the Duke of Grafton. were done too grosely ... but the generallity were allwayes pleasd with his likeness of portrait'. [1] The following year he records that 'having had one picture drawn of him-self by Vanlo', Walpole 'lately since the death of Mr. Jarvis. sat to him for another (at whole len:)’. [2] Jervas had been principal painter to the King and Sir Robert 'so well likd and approvd of his [Vanloo's] painting that had it not been for an Act of Parliament that prevented Forreigners of any Nation to have or enjoy places of Salary in the Government. he would have presented him with the place of King's Painter'. [3] An engraving by J. Faber junior showing the sitter as one of the ‘Lords of the Regency Anno 1741’ [4] relates presumably to Vertue's note, May 1742, that 'Mr. Faber has lately finisht a large whole len. print of Sr. Robt. Walpole. in his robes. & holding the purse from a painting of Monsr. Vanlo.'. [5] The original oil is doubtless the ‘Ld Orford in Chance. Robes' listed, in the 'Blew Bedchamber' at Houghton in 1744. [6] This must now be the portrait in the Hermitage in chancellor's robes, signed and dated 1740, presumably among the Houghton paintings sold by the sitter's grandson in 1779. [7]
In a letter dated 12 September 1777, Cole wrote to Horace Walpole that the Bishop of Ely, [8] 'out of regard to your family, and father in particular ... had commissioned his son to buy your father's full length picture by Vanloo, and sold among Lord Montfort's pictures by Christie ... Lord Hertford was determined to have it ... I knew the late Lord Montfort gave sixty guineas to Vanloo for it’. [9] The portrait, a version of the Houghton type, is still at Ragley, the Hertford family seat. [10] A version is also at Lambeth Palace and another, presented to Sir Charles Hanbury Williams (q.v.) by the sitter, at Christie's, 17 March 1888, lot 41, listed 'in robes of chancellor ... a replica of the Picture at St Petersburg', from the collection of F. Hanbury-Williams, is now in the collection of J. M. A. Hanbury-Williams.
NPG 70 is a fair example of the type. Other three-quarter lengths include one descended to R. Hanbury-Tenison, Pontypool, given by the sitter, and the portrait seen by Scharf at Downing Street in 1892, later transferred to Chequers. The present head and shoulders in the cabinet room at 10 Downing Street was given by Lord Lee of Fareham. Further examples are the portrait exhibited ‘House of Guelph', 1891 (17), lent by Spencer Walpole, and the three-quarter lengths at Picton Castle (4), Haverfordwest, collection the Hon. R. H. Philipps, 1962, [11] at Dolau Cothy (8) (now National Trust), Carmarthenshire, collection Major H. J. Lloyd-Johnes, [12] and at Rockingham Castle, 1934.
A 'whole length in the Garter robes' in the 'Blue Damask Bed Char.' appears in the 1750 inventory of Houghton. [13] Like the portrait in chancellor's robes in the 1744 inventory, this is also located over the chimney. Presumably it is a replacement, possibly because of the sitter's resignation as chancellor.
A seated variant shows the sitter with his left hand on the great seal and his right out-stretched. A studio version is at Kensington Palace (Sir Oliver Millar, The Tudor Stuart and Early Georgian Pictures in the collection of Her Majesty The Queen, 1963, 542) and another at Christie's, from the collection of A. Morrison, 23 November 1951, lot 103, as by Sir James Thornhill, is at the Shire Hall, Warwick. A half length was at Stackpole Court (36). [14] A portrait described 'to the waist in his Garter robes ... perhaps by Eccardt' was at Holland House (140) [15] and one at Wimpole, 1798, was listed 'copy from v Loo'. [16]

1) Beginning and end of inscription cut by edge of canvas.

Small retouchings in the chin, traces of bituminous craquelure in black of gown, level with his right hand; surface cleaned and varnished, 1895; re-varnished, 1970.