11 of 1569 portraits matching these criteria: 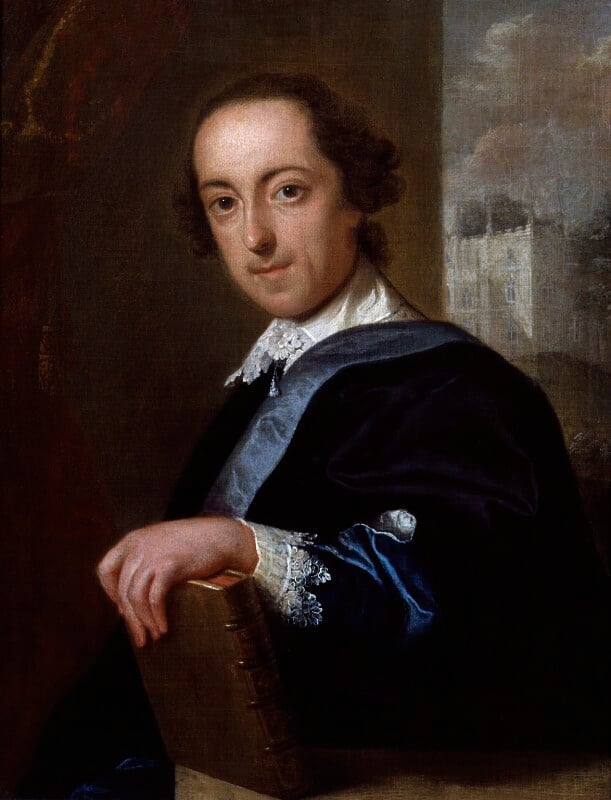 A paper on the stretcher inscribed by the sitter:1 Horace Walpole/youngest Son of Sr R. Walpole/by Eckardt/1754.

One of six portraits commissioned by Walpole from Eccardt between 1746 and 1754 which hung together in his blue bed-chamber at Strawberry Hill. Their compositions derived from Watteau, Rubens and Van Dyck, and they were shown in black and gold frames, ‘carved after those to Lombard’s prints from Vandyck, but with emblems peculiar to each person’. [1] The other portraits were of Richard Bentley (NPG 5885) and Thomas Gray (NPG 989), both after Van Dyck; Sir Charles Hanbury Williams (untraced); General Henry Seymour Conway and his Wife, after Watteau (private collection), and Charles Churchill and his Wife, in the manner of Rubens (Lewis Walpole Library, Farmington). On 18 May 1754 Walpole told Bentley that all the portraits were installed, one in each wall panel; ‘mine’, he added, ‘is to match yours [i.e. NPG 5885]’. [2] NPG 988 had evidently not then been started, but it was completed by the end of the year (according to Walpole’s label quoted above).
The pose of NPG 988 is taken from Van Dyck's portrait of Simon Vouet as engraved by Robert van Voerst; [3] Walpole described NPG 988 as 'from Vandyke, leaning on the Aedes Walpolianae: behind him a view of Strawberry Hill'. [4] The House is seen from the east, showing two new rooms, the great parlour and the refectory with, above it, the library, which were completed in 1754. The Aedes, Walpole's catalogue of his father's pictures at Houghton, was his first book, published in 1747.
A version showing Strawberry Hill with the east battlement surmounted with a cross (added between 1754 and 1764) is in an English private collection; in 1762 Mrs Mary Shepherd bequeathed 'The picture of Horace Walpole' to a direct ancestor of the present owner. [5] A copy in another English private collection is possibly by Thomas Stewart (‘a portrait of Lord Orford, copied from Echard by Stuart, in 1787' was in Strawberry Hill in 1807); [6] another is at Marble Hill. [7] A miniature copy in watercolour by G. P. Harding was sold Sotheby’s, 16 December 1974, lot 61.

Brown eyes, dark brown hair, wearing Van Dyck costume, a black cloak lined with silver blue silk over blue breeches and tunic with white bobbin lace collar and cuffs;1 his left hand holds a copy of the Aedes Walpol[ianae]; a red curtain to the left, a distant view of Strawberry Hill to the right.

By descent from the sitter; Strawberry Hill sale, 22nd day, 19 May 1842, lot 28 (‘... an exceedingly clever original picture; it has been highly esteemed from its likeness to Horace Walpole, and from it the Portrait in the Catalogue has been taken’), bought by the Rev Horace George Cholmondeley (d. 1851); his son-in-law, Canon Francis Vansittart Thornton (d. 1895); purchased through Colnaghi 1895.