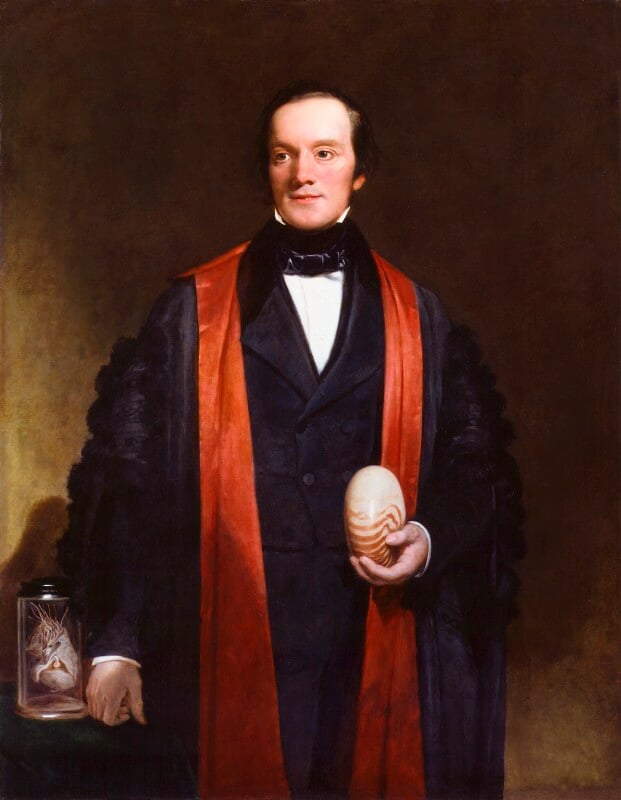 This portrait was first offered to the NPG in 1889, but only entered the collection on the death of the sitter. At the time it was first offered, Davies Sherborn wrote (letter of 5 November 1889, NPG archives): 'the portrait represents the Professor speaking upon the "Pearly Nautilus" - one of his most famous works & one he published about 1832.' He is wearing the robes of a professor. A photogravure of this picture was published Photographische Gesellschaft, Berlin (example in NPG). Another version, almost identical in pose and features, but showing Owen holding a large bone, was in the collection of G. F. Boston, 1948; it came from the collection of Sir Robert Peel, and was in the sale of Peel heirlooms, Robinson, Fisher and Harding, 6-7 December 1917 (lot 59). There are two further half-length paintings by Pickersgill, one in St Bartholomew's Hospital, engraved by W. Walker, 1852 (example in NPG), and the other, showing him in academic robes, reproduced Rev R. Owen, The Life of Richard Owen (1895), I, frontispiece; a water-colour, apparently based on this portrait, and attributed to W. Etty, is in the Royal College of Surgeons. The St Bartholomew's Hospital portrait may have been that exhibited RA, 1856 (93).

Healthy complexion, brown eyes and hair. Dressed in a dark stock and neck-tie, white shirt, black waistcoat, black coat and trousers, and black and scarlet academic robes. Holding a white nautilus shell with brown markings. On the left is a table with a green cloth, and in a glass jar what appear to be the innards of the shell. Background colour greenish-brown.

The sitter, presented by his daughter-in-law, Mrs Emily Owen, in accordance with his wishes, 1893.