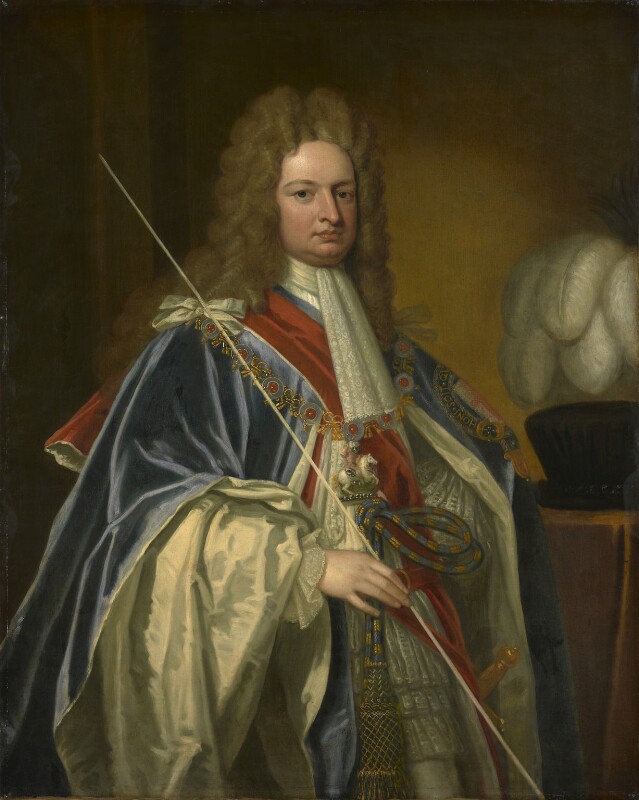 A reduced version of the Kneller whole-length, see NPG 4011, with minor differences (in the position of the staff, folds of the robe, etc.), as engraved by G. Vertue in 1753 (with lines from Pope’s Epistle to the Earl of Oxford published in 1722: ‘A Soul supreme, in each hard instance tried …’). [1] Other three-quarter-length versions include those in the British Museum; [2] sold Sotheby’s, 30 January 1985, lot 47, and those formerly at Patshull and Compton Verney. [3] A close variant sold Phillips, 4 July 1977, lot 98. Half-lengths recorded at Stoke Edith in 1910 and at Hinton St George (sold Sotheby’s, 19 February 1969, lot 13). A much-reduced oval half-length was sold Christie’s South Kensington, 6 September 1988, lot 46A, and a bust-length variant at Sotheby’s, Pulborough, 1-4 March 1983, lot 1218.
Versions of a bust-length variant, holding a staff but wearing a plain dark coat, include those sold Christie’s, 14 December 1983, lot 74, and another in a private collection.

1) As stated by Henry Smart to Scharf (undated letter on file). Lady Frances was the sister of the 6th and last Earl of Oxford (see also under Newton).