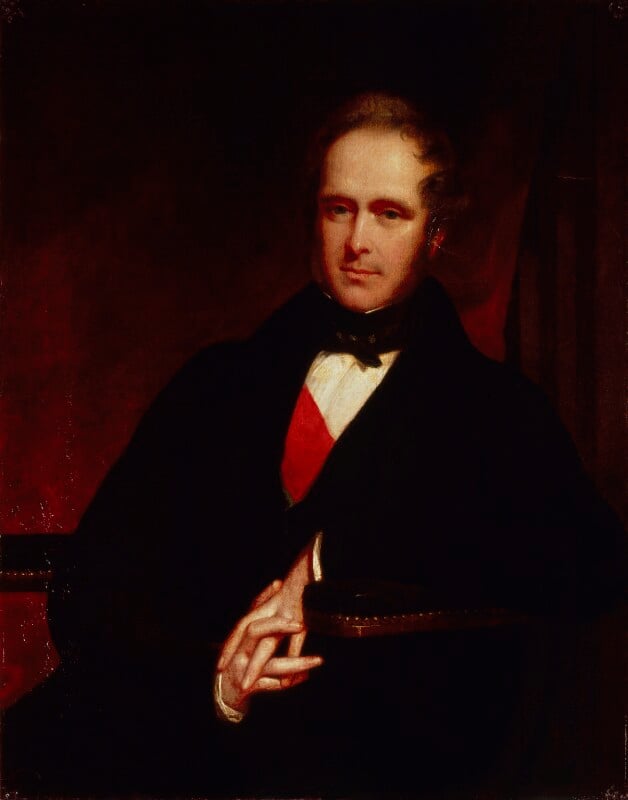 Like Partridge's portraits of Aberdeen (NPG 750), Macaulay (NPG 1564), and Melbourne (NPG 941), this portrait is closely related to the figure of Palmerston in Partridge's group, 'The Fine Arts Commissioners, 1846' (see NPG 342), and was presumably painted as a finished study for it. Palmerston is wearing the ribbon of the Bath. Partridge painted most of the Commissioners individually between 1844 and 1849, and retained these portraits. After his refusal in 1846 to exhibit any further pictures at the Royal Academy, he exhibited many of these portraits at his own gallery. At his death in 1872, his executors attempted to sell them to the original sitters or their descendants, and auctioned the remainder at Christie's, 15 June 1874- W. Cowper Temple, later Lord Mount Temple, was the second son of Palmerston's wife by her first marriage to Earl Cowper. He died without heirs in 1888.
In the past, the date 1846 has been given to all Partridge's portraits of the Commissioners, and to the finished group, presumably because this was the date of the meeting depicted. It is clear, however, from contemporary evidence that the big picture was still in progress in 1853. Palmerston was one of the first to be painted; a letter from Lady Palmerston (NPG archives), dated Tuesday, 26 March (if the day and date are correct, the year must be 1844), informs Partridge that her husband will sit on the following day. In Partridge's two notebooks, listing pictures in his possession in 1863 and 1870, the NPG portrait is dated 1845. A copy by A. Dyer is at Hertford County Hall. Another oil study of Palmerston for 'The Fine Arts Commissioners' was also owned by Partridge, described in his two MS notebooks as a large half-length, and dated 1846.
Partridge painted another portrait of Palmerston in 1849, listed in his 'Sitters Book' (NPG archives), under 1849. This was a full-length painting, commissioned by members of the House of Commons, and presented by them to Lady Palmerston after the debate on the Greek Question, 25 June 1850. It passed by descent from Evelyn Ashley to Lady Mountbatten, and is now on loan to the Department of the Environment from Earl Mountbatten. Sometime after 1868 Partridge repainted the head of Palmerston on a new piece of canvas, which was then inserted into the original canvas. The painting was exhibited SKM, 1868 (456), and engraved by S. Cousins (example in NPG), engraving reproduced P. Guedalla, Palmerston (1926), facing p 306. A letter from Palmerston to Partridge of 7 February 1850 (NPG archives) informs him how to get to the Visitors Gallery of the House of Commons.

The artist; purchased from his executors by W. Cowper Temple1; Evelyn Ashley, presented by him, 1896.

1 Letter from W. Cowper Temple of 17 November 1873, asking his solicitor the address of the solicitors dealing with Partridge's estate, so that he can settle the bill for this portrait (NPG archives).