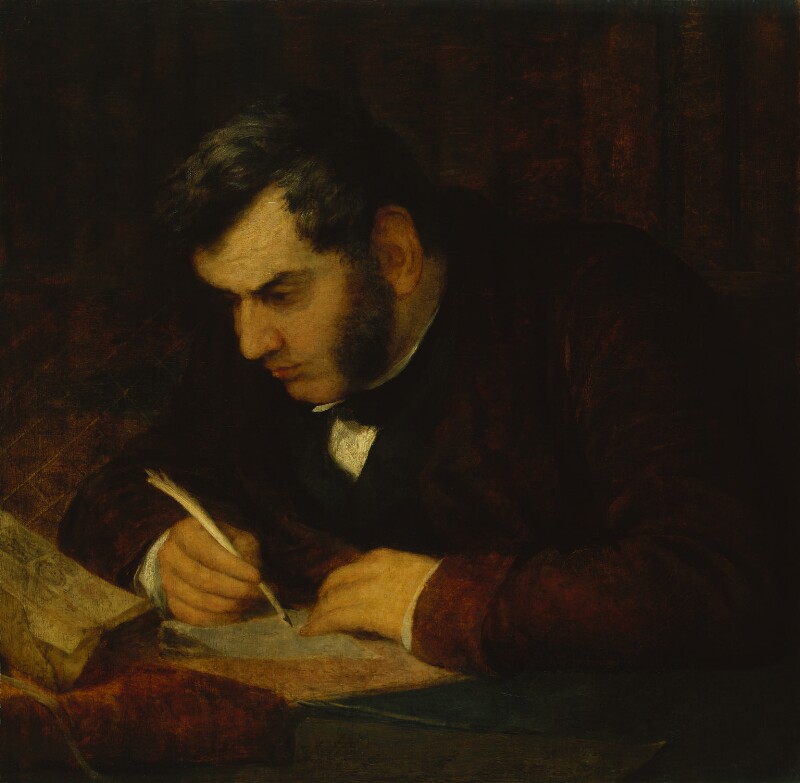 This is an unfinished version of the portrait in the Ilchester Collection, exhibited Watts Exhibition, Arts Council (London only), 1955 (12). The latter was apparently executed at the British Museum between 16 October and 7 November 1847, and shows Panizzi in a characteristic attitude, transcribing notes from an early printed book. In an undated letter, Panizzi wrote to Haywood:

'I dined at Holland House on Saturday last, and Watts (the painter) came after dinner. There is at Holland House a famous portrait of Baretti by Sir Joshua Reynolds. Lord and Lady Holland and some of the guests having prepared all this without my knowledge beforehand, surrounded me after dinner, made me look at Baretti's portrait, and then said there should be a pendant to it, and that my portrait, taken by Watts, should be the thing. It was no use saying more than I did - which was not a little to decline the honour. The thing was a foregone conclusion; and so, before Watts goes to Italy, which he is going to do almost immediately, he is going to paint me.' [1]
Another quite different portrait of Panizzi was presented to the sitter by the officers of the British Museum on his retirement in July 1866, and subsequently returned by him to the Museum; it was exhibited RA, 1868 (685), engraved by J. Outrim, published J. Noseda (example in British Museum); Outrim's engraving was exhibited RA, 1874 (1276).

Healthy complexion, brown eyes, brown hair with grey streaks. Dressed in a white shirt, black neck-tie, dark green waistcoat, and dark reddish-brown coat. Seated at a table covered in a dark green cloth. The book Panizzi is reading is white, and it rests on another reddish-brown, leather-bound volume. The piece of paper on which he is writing, with a white quill pen, is white and it rests on a pinkish blotter. In the immediate foreground is a dark green sheet of paper, apparently an official British Museum form on which is printed, '[PRIV]ATE AND CONFIDENTIAL/... PRINTED BOOKS/... [BRIT]ISH MUSEUM.' At the top of this paper is part of a hand-written note, which appears to read: 'A Panizzi/British Museum/Complimentary'. In the background of the portrait are shelves with large books, reddish-brown in colour; on the left the grid pattern of a wire-fronted bookcase is vaguely indicated.