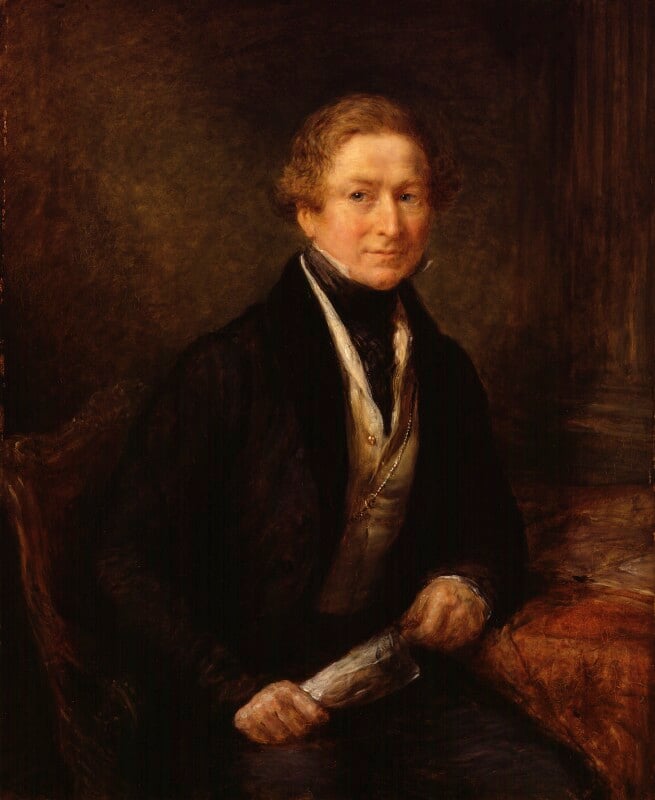 This portrait was engraved by the artist, published T. Boys, 1838 (example in NPG), and B. Moss, 1850 (example in British Museum). An almost identical water-colour version of the NPG portrait (head and shoulders only) was sold Christie's, 8 June 1962 (lot 11), bought Tillotson. An oil version of the NPG painting (the head and costume are almost identical, but the pose is slightly different), signed and dated 1840, is in the collection of the Hon Robert Peel, exhibited Jubilee Exhibition, Manchester, 1887 (767), sold Christie's, 10 April 1897 (lot 142), and 26 February 1937 (lot 119). A second version of the 1840 portrait is owned by Earl Peel.
There are two other separate portrait types of Peel by Linnell. One was in the Linnell Sale, Christie's, 15 March 1918 (lot 45) (sketch of it in NPG sale catalogue), which shows Peel looking out, with one hand on his breast, and the other resting on books. The other type was offered to the NPG by Messrs Radclyffe in 1869, but declined; there is a sketch and a full description of it by G. Scharf, Sir George Scharf's Trustees' Sketch Books (NPG archives), XV, 8 and 24, and it was engraved by J. Scott, published T. Boys, 1840 (example in NPG). Scharf went to interview the aged Linnell in connection with this last portrait. According to Linnell the painting was based on a drawing from the life, and was commissioned by a publisher (presumably Boys or Radclyffe). The drawing mentioned by Linnell may have been the one in the Linnell Sale, Christie's, 15 March 1918 (lot 81); this lot also included a drawing by Linnell after Lawrence's portrait of Peel (see NPG sale catalogue). In the interview with Scharf, Linnell also stated that Peel had expressly sat to him for the NPG portrait, which was then owned by Norris: 'He spoke of Sir Robert as a kind friend and a generous Patron of his, and so he seems invariably to have proved to all rising and deserving artists.' [1]
A painting of Peel's cousin, Robert Peel, by Linnell was exhibited RA, 1839 (498), engraved by J. Linnell, published Welch and Gwynne, 1841 (example in NPG). Linnell also painted Peel's daughter in 1838.

Healthy complexion, bluish eyes, auburn hair. Dressed in a black stock, white collar, white waistcoat with a silver watch-chain, black coat, and dark grey trousers. Seated in a gilded armchair with a red-covered back, holding a white document, leaning his elbow on a table with a reddish-brown cloth, and an open book (very sketchily indicated). There is a pillar on the upper right-hand side of the picture. Background colour various shades of brown and green.

1 Norris was a partner of Peel’s father; he himself was painted twice by Linnell in 1836 and 1837.
2 Cardwell was one of Peel’s executors.