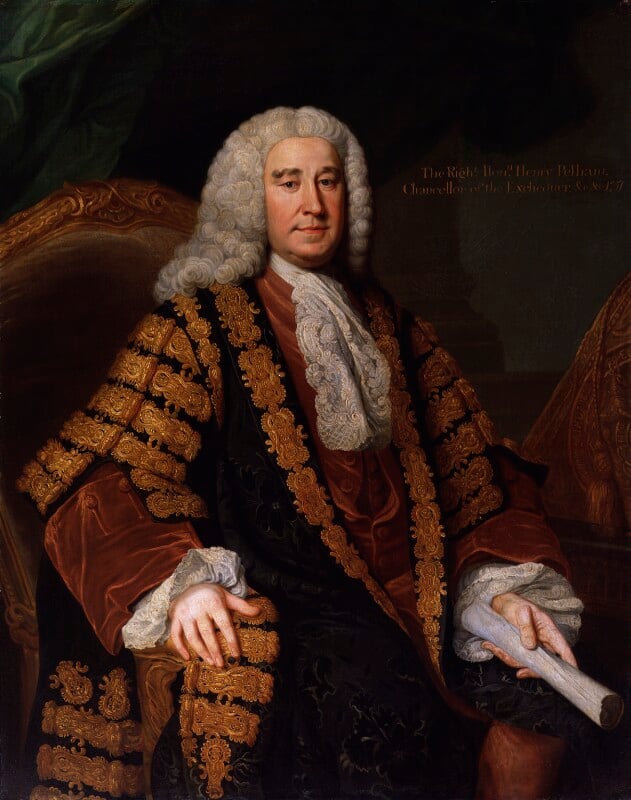 NPG 221 is one of several three-quarter lengths of near uniform quality and appearance, of which the first is probably the portrait at Stanmer now on loan, as after Shackleton, from the Chichester Estates to the Department of the Environment. This is also likely to be the portrait reproduced in what appears to be an identical frame, sold Knight, Frank and Rutley, 7 June 1915, lot 43. Another good 50 x 40 is at Rockingham Castle (69) together with a small copy (110), 12 x 10 in., by descent through the sitter's daughter and coheir Grace, who married in 1752 Lewis, 1st Baron Sondes. [1] Other versions include one at Clumber [2] and another, with the rolled paper addressed to the sitter, in the collection of Lord Rosebery. A pastel by Hoare from Clumber with the same face mask as NPG 221 was at Christie's, 4 June 1937, lot 1. It is very like the Gallery's pastels of Pope and Newcastle. Although NPG 221 is the only dated version, the inscription 1751 should be considered in the light of Houston's engraving and Vertue's comment, June 1752, that ‘... this spring ... Mr. Hoar ... removd to London to paint the pictures of several noble Men ... (his principal employment in Town has been to draw the pictures of Hon. Mr. Pelham ...)'. [3]