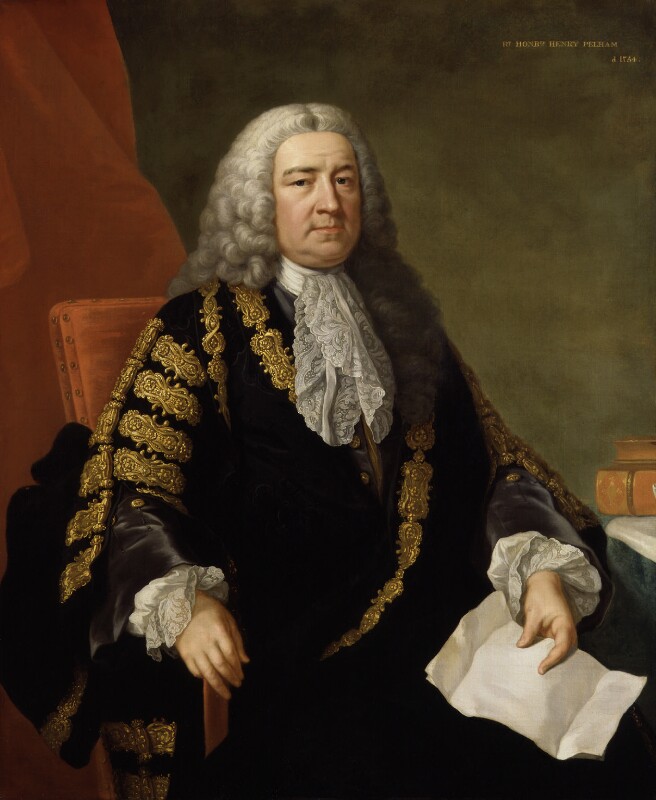 Although the closeness to the Hoare type (NPG 221) might suggest that it derives from it, the handling of NPG 871 seems to point to a separate sitting or sittings. A replica showing the large standish, barely visible in NPG 871 at Christie's, 14 January 1944, lot 149, is possibly the portrait formerly at Clumber before dispersal of the collection in 1937, lent by the Duke of Newcastle to the 'Art-Treasures Exhibition', Manchester, 1857 (350). A double portrait in the same pose with his secretary John Roberts [1] was engraved by R. Houston. An oil showing the letter dated London 1752 and signed Merepoix [2] as in the Houston engraving J. Chaloner Smith, British Mezzotinto Portraits, 1878-83, 87 (II state) was in New York, 1947, and the London art trade, 1958. A single portrait at Hagley was listed c.1796 [3] as by Shackleton. A standing whole length, to the right, also in chancellor's gown and in poor condition when sold at Christie's, 2 April 1965, lot 136, was inscribed as by Hoare but might well be by Shackleton (d. 1767); despite his position as principal painter to George II from 1749, this artist remains comparatively obscure. A rare example of his work in a public collection is the whole length of George II (q.v.) commissioned by the British Museum in 1762; compared to NPG 871 with its heavy flesh tones and weak modelling of the left hand, the treatment is much more painterly.

Bought, 1891, from Lord Chichester as by Hoare; from the Chichester collection, Stanmer, where sketched by Scharf, October 1886; [1] presumably by descent from the sitter whose nephew Thomas was created Earl of Chichester in 1801.