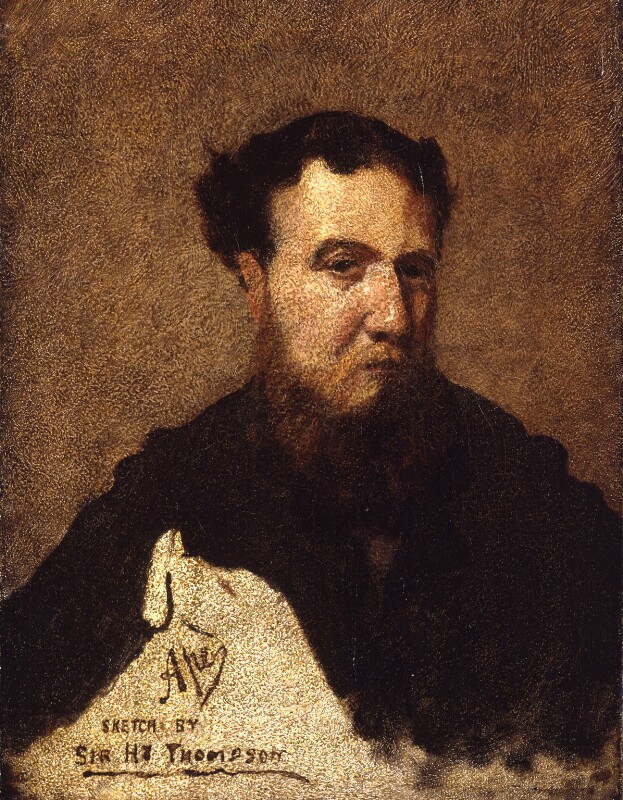 The portraits by Jules Bastien-Lepage (see ‘All known portraits, By other artists, 1879’) and Thompson are the only non-caricature portraits of Pellegrini. Thompson’s is also the earliest in the iconography. It is undated but probably belongs to 1874 when Thompson himself was the subject of a Pellegrini Vanity Fair cartoon, appearing as a lugubrious medic over the caption ‘Cremation’. [1]

Henry Thompson was an astonishing polymath. He earned a place in the Dictionary of National Biography as a surgeon and leading British urologist, and his publications included works on cremation, gastronomy and motoring, often with his own illustrations. [2] He also wrote two best-selling novels. In the 1860s he took up painting still-lifes and landscapes, as a relaxation from medical practice, with some success. [3] With James McNeill Whistler he illustrated a catalogue of his collection of Chinese porcelain in 1878.

His painting of Pellegrini in a serious mood presents an unusual view of the artist. The paint is thickly applied and the composition destabilized by the unreadable triangle of creamy white in the foreground. The identification with Pellegrini rests on appearance and the inscription ‘Apè’ in the familiar script. The portrait was offered as a gift by Mr Joseph Ceci of The Pantiles, Tunbridge Wells, in 1955, and accepted by the Trustees ‘on the understanding that the portrait is intended for our reference collection’. [4] It came with no earlier history.

1) Vanity Fair, 1 Aug. 1874, ‘Men of the Day LXXXV’; chromolithograph, coll. NPG. Thompson was an advocate of cremation and largely responsible for introducing it to Britain; he published a book on the subject in 1874. T.G. Bowles’s biographical commentary on the caricature also praised Thompson for ‘addressing himself more especially to the study of some of the most despised organs of the human frame’, that is, the urinary system.
2) ODNB; and Wood 1995.
3) Exh. RA between 1865 and 1885.
4) Note in NPG RP 3947. Nevertheless, it was given an NPG Main Collection accession number.