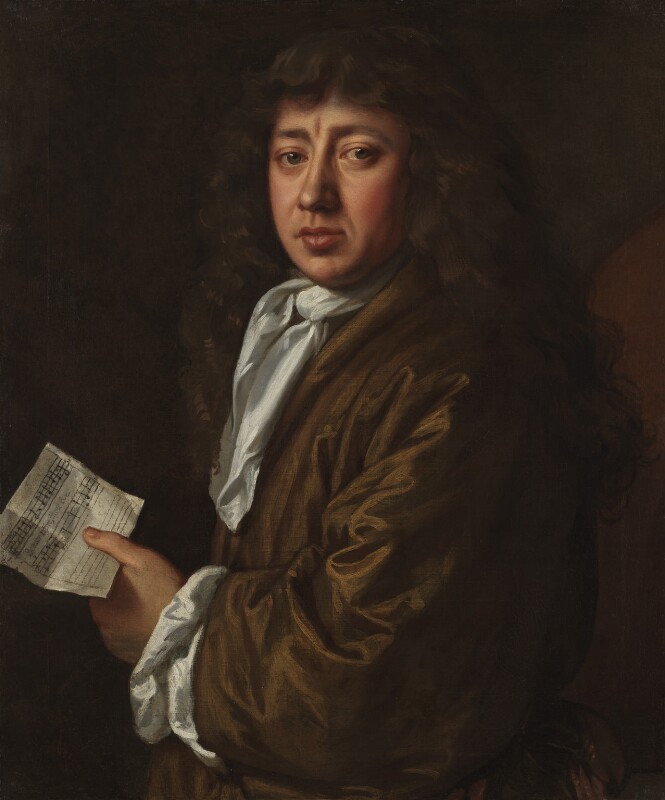 The sheet of music is inscribed: Beauty retire, thou etc. with, above and almost illegible: Solyman to Roxana.1

1 But clear in an anon. 19th-century engraving (NPG sitter boxes).

Painted between March and May 1666, between the Plague and the Great Fire of London, this shows Pepys in his thirty-fourth year as he was beginning to prosper in the world. It made a pair with Hayls’s portrait of his wife completed in March 1666.
He described progress in his Diary. He began sitting on 17 March 1666 and ‘[Hayls] will make me, I think, a very fine picture… I sit to have it full of shadows, and do almost break my neck looking over my shoulder to make the posture for him to work by’; further sittings were noted on 20 (‘I do not fancy that it hath the ayre of my face, though it will be a very fine picture’), 23 and 28 March. On the 30th he sat ‘till almost quite dark upon working my gowne, which I hired to be drawn [in] it - an Indian gown,…’; on 11 April he found the portrait almost finished ‘but for the Musique’, but on the 13th, after spending an hour with Hayls viewing pictures in Whitehall Palace, he asked him ‘to put out the Landskipp’ and have instead a plain sky; on the 20th he commented that ‘it does not please me thoroughly now it is done, yet it will do better then as it was before.’
X-radiography reveals no trace of a landscape background, but does show extensive alterations (described above) in the bottom left area, presumably because of the sheet of music which Pepys wished to have clearly shown; it was of his own recent composition. [1]
A version belonging to the Clothworkers’ Company was stolen in 1976 [2] and replaced by a copy made in 1977 by Mary Remington; [3] another version with the Clothworkers’ Company was acquired in 1947; [4] a copy is in the vestry of St Olave’s, Hart Street; a modern copy by Melicent Grosse is in the Bodleian Library, [5] and a small copy was sold Christie’s South Kensington, 14 November 1991, lot 186. Pepys mentioned an untraced copy by ‘Bosse’ being finished on 14 July 1668 for William Hewer. [6]
Hayls also painted Pepys’s father in June 1666.

Painted for the sitter in 1666; passed to the Pepys-Cockerell family through the marriage of the sitter’s nephew’s daughter with John Cockerell; Cockerell sale, 23 May 1848, lot 118 as Portrait of a Musician, bought Peter Cunningham, who identified it; purchased from Robert Cooke of Albemarle St., London,1 acting on behalf of the Cunningham family, 1866.