1 of 20 portraits of Spencer Perceval 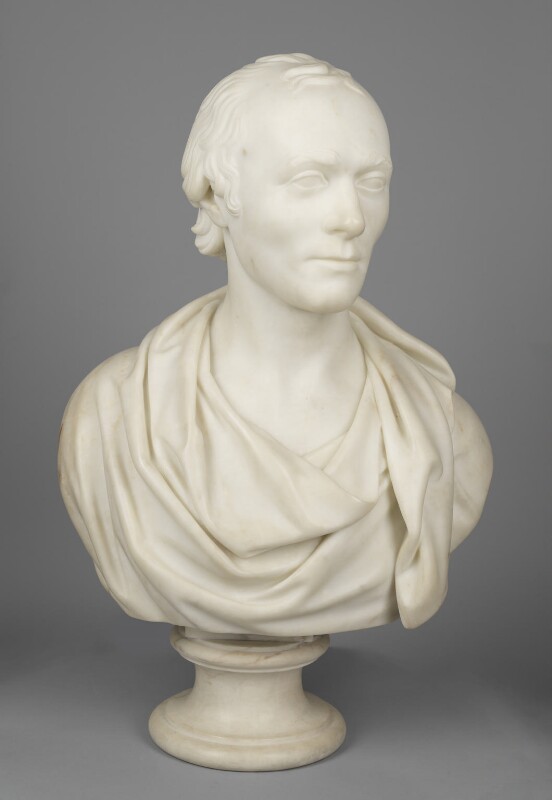 Nollekens told Farington that shortly after the assassination on 11 May he was summoned to Perceval's rooms at the Treasury and, with the family's permission, instructed to make a death-mask. 'He saw the body of Mr Perceval laid upon a table with His cloaths on and just as He was when assassinated, the Coroner's inquest not having finished their investigation. He took a cast from the face and that very successfully … He saw Lord Arden [brother] who objected to His taking away the Cast till Nollekens shewed Him it would be better that He shd take it away in order to make it more fit to be viewed. Every day numbers of persons call to see the Cast, and many are much affected when viewing it. - He has already had orders for 3 or 4 marble busts to be made from it' (Diary of Joseph Farington, 23 May 1812). By 27 November he had orders for 15 busts at 150 guineas each (J. T. Smith, Nollekens and his Times, 1920 edn., II, p 13). The shoulders were modelled from a Chelsea Pensioner with two wooden legs and a crutch (ibid., I, p 328).
Large numbers of these busts were turned out from the Nollekens studio, possibly one of the best being at Apsley House incised: Nollekens fecit 1813 and bought by the Duke of Wellington from the sculptor personally; others are at Harrow School (1813); formerly Rudding Park (1813) possibly that at Sotheby's 25 January 1980 (9) incised: Nollekens Ft 1813; Belton House (1818), and other undated studio versions in the House of Commons, Speaker's House (undraped variant), Treasury Boardroom, Ealing Public Library, etc. Copies may have been made in Florence by Bartolini. A version was exhibited RA 1813 (919) and engraved by Blood for The European Magazine, 1 July 1813.