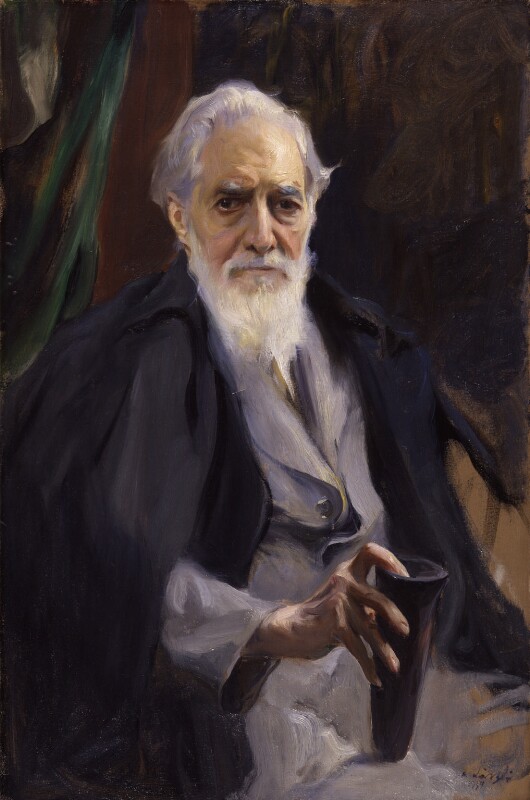 In 1933 Petrie’s colleagues at University College London commissioned a portrait to mark his retirement from the chair of Egyptology; the selected artist was Philip Alexius de László. Petrie, then aged 81 but still in robust health, was about to move permanently to Jerusalem. De László met Petrie’s wife in London and discussed the possibility of travelling to meet his proposed sitter. But the arrangement was postponed, de László writing:

Alas, I have been very busy since we met, and I have been ordered to go to the South of Italy and take an absolute rest for a month, and so to my regret I have to give up for the present my contemplated visit to Palestine. I much hope it is only postponed, however. It is a great disappointment to me, as I hoped to come out and do studies there at the same time.

Will you please let me know when we may expect you here in London again, as I am looking forward to do [sic] a study of Sir Flinders.[1]

Hungarian-born Philip de László had settled in London in 1907, exhibiting a bravura style and becoming a leading painter of society and royal sitters. The National Portrait Gallery collection contains 14 of his oil portraits; see, for example, that of Luke Fildes (NPG 4960).

Petrie was renowned for his independent opinions, his conservative political views, his disdain for authority and his refusal to suffer those he thought fools. These qualities may suggest affinity with de László, and account for the pleasure the artist took in painting his sitter, who briefly became a friend. Before Petrie’s final journey to the Middle East members of the de László family filmed him at a social occasion in their garden (see ‘All known portraits, Photographs and film, 1934’).

According to the de László Foundation, ‘de László took so much pleasure in painting Petrie that he did two other portraits’.[3] The premier and largest work is that for UCL showing Petrie holding a statuette of a tutelary goddess, variously said to be Isis or Neith. A second, smaller and looser version also now at UCL shows Petrie in three-quarter-profile to left and was presented to the sitter. The present work, which may be considered the third variant version, was presumably executed after the main work was completed and was kept by the artist. No preparatory study is known. It renders the elderly but still active archaeologist in his full dignity, with snowy beard, rumpled suit and bony fingers proprietorially clutching an ancient artefact.

In accordance with de László’s practice, the paint is applied alla prima directly on to the light-coloured ground surface, without underdrawing, preliminary painting or subsequent layers, producing the fluid effects the artist aimed for. The brushstrokes are well-laden and vigorously applied. Subsidiary areas of the canvas are lightly covered (especially down the right edge) so that the weave is visible everywhere except under the head and hand. Petrie is shown holding a V-shaped black-rimmed Badarian-era pot, which he himself had found in a burial site at Naqada in 1895 and which was inherited by his daughter Anne, who dated it to around 5000 BCE.[4] Badarian pottery, made without a wheel, is described as ‘some of the most wondrous pottery ever produced in Egypt’.[5] Petrie’s choice of object for this portrait testifies to his achievement in establishing pre-dynastic sequence-dating through excavations at Naqada, where the 1895 season has been described as ‘one of the most important in the whole of Flinders Petrie’s career’.[6]

Inherited by the artist’s youngest son John, the present work was a lifetime gift by him in 1949 to Petrie’s successor at UCL, S.R.K. Glanville, who later became Provost of King’s College, Cambridge. ‘Professor Glanville felt it important that a good likeness of Petrie was bequeathed to the N.P.G. and accordingly expressed willingness for this portrait to go there on his death.’[7] On Glanville’s death in 1956, John de László approached the NPG, stating that his father ‘had a great admiration for Sir Flinders Petrie, and did in fact paint this portrait … for himself’. He added that the portrait was presented to Glanville ‘as a gift for his life-time on the understanding that on his death it would be left to the Department of Egyptology, Cambridge. A few months prior to Professor Glanville’s death in April 1956, it was agreed by him and me that, at the suggestion of Miss Anne Petrie, the picture should first be offered to the National Portrait Gallery.’[8]. In a letter to the Gallery, Anne Petrie expanded, saying that her parents has never liked the portrait by G.F. Watts (NPG 3959):

Professor Glanville replied to me shortly before his death: ‘As much as I would like to see a portrait of your father permanently in the Department at Cambridge, I myself think it is even more important that he should be properly represented in the National Portrait Gallery…’[9]

The work was delivered from King’s College, Cambridge on 22 November 1956 and was accepted by the Trustees in December as the gift of John de László. It has been on long-term loan to the British Academy since 1982.

The fragmentary label on the stretcher suggests that the work may have been exhibited in Dundee (‘1934’ perhaps denotes the year of execution), but no record of this has yet been traced. There were exhibitions of de László’s work in the city in 1929 and 1932, and he was acquainted with local curators, collectors and dealers.

Given by the artist’s son, John Adolphus de László, 1956.