1 of 10 portraits by Alphonse Legros 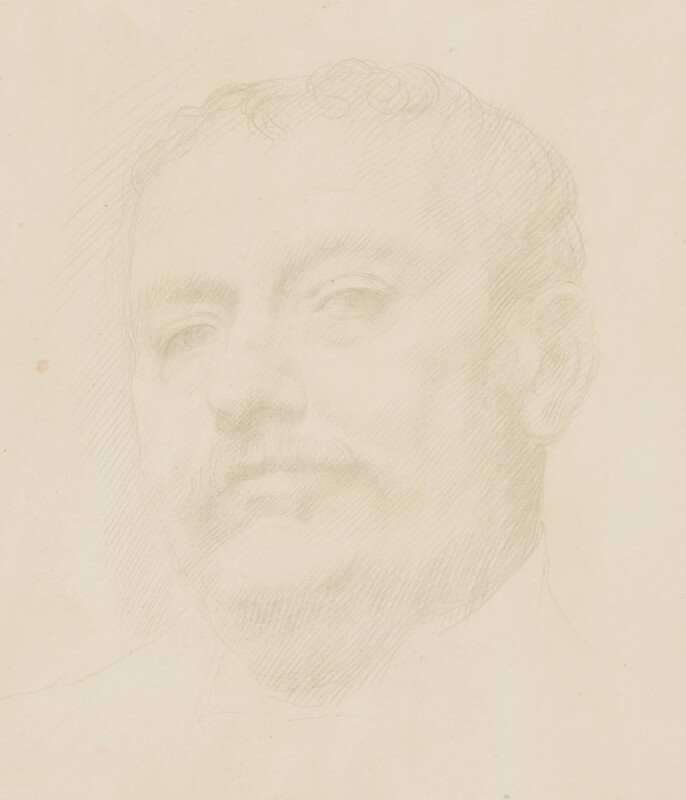 Claude Phillips first trained as a lawyer, specializing in international law, working in and touring around many European cities in the 1880s. In 1890, however, the date of the Legros portrait drawings, he had given up the legal profession for music and art journalism, notably as a contributor to the Daily Telegraph and the Magazine of Art. An excellent linguist, his French was fluent enough to ensure his nomination as the English correspondent for the Gazette des Beaux-Arts from 1884 to 1891, and he was known as a reviewer, and later as an art expert, on both sides of the Channel. [1]

The Magazine of Art had been edited by W.E. Henley between 1881 and 1886. Henley had been a fervent admirer of Auguste Rodin since his introduction to the sculptor by Alphonse Legros, when Rodin visited England in 1881. Thereafter the Magazine of Art championed him, and in the 1888 volume Claude Phillips – who had succeeded Henley as its editor – contributed the first major article on Rodin in an English publication. Phillips himself had gained an entrée to Rodin’s studio in 1884, thanks not to Legros or Henley but to the collector Constantine Ionides. [2] Ionides had known Legros since the 1860s, had sided with him over his quarrel with James McNeill Whistler, and commissioned a medal and portraits of his family from the artist. Rodin sculpted heads of Legros (1882) and Henley (1884–6, see NPG 1697), and dedicated two sculptures to Claude Phillips in ?1888. [3]

It is against this background of a dense network of contacts, friendly and professional, that Legros’s drawings of Phillips should be seen and understood. There are no details surrounding the sitting, no record of contacts between artist and sitter, but their friendships with each other’s friends are well documented.

In 1890 Alphonse Legros was still professor at the Slade; he had been appointed there in 1876 and was to resign in 1893. One of his specialities was portrait heads in metalpoint on prepared paper. [4] The pink washes are freely laid in, the metalpoint typically faint. NPG 2431 and NPG 2432 are complementary but not a neat pair: the profile is on a slightly larger piece of paper, and occupies more of the page. Legros traces a contour around the heads and conveys volume with light, insistent hatching, cross hatching and shading. Pose and technique combine to project an air of cool detachment.

Legros was one of the great portrait etchers of all time but his intuition for individual character and temperament would enable him to present his subject as a vital human being, whether his graphic medium was etching-needle, drypoint, pencil, gold or silver-point. And the deep human sympathy and psychological interest fused with the pictorial interpretation would be as vividly and artistically concerned with an humble old priest, a simple rustic, a nameless fiddler, as any illustrious poet, artist, musician, statesman or scientist. [5]

The only portraits of Phillips of any quality, these drawings are practically unknown, having passed seamlessly from Phillips’s house (where they hung in his sister’s bedroom) to the National Portrait Gallery, where they have been rarely displayed. His executor, Alec Martin, [6] oversaw complex negotiations over further bequests to the National Gallery, the National Gallery of Scotland, and the Victoria and Albert Museum amongst others. The four items in the Phillips Bequest to the NPG were initially declined: the Trustees rejected outright a self-portrait by John Opie and a miniature of Charles I, while the pair of Legros portrait heads was accepted but for the Gallery’s reference collection only: ‘The Trustees declined to waive The Ten Years Rule in this case. They expressed their willingness to accept the portraits for the reference collection of drawings, but not for exhibition.’ [7] So in 1924, at the time of his death, Phillips’s eligibility was apparently not fully endorsed by the Trustees. In October 1929, however, for reasons unrecorded, the two drawings were duly transferred to the Primary Collection. [8]

The sitter, by whom bequeathed to the Gallery, August 1924.