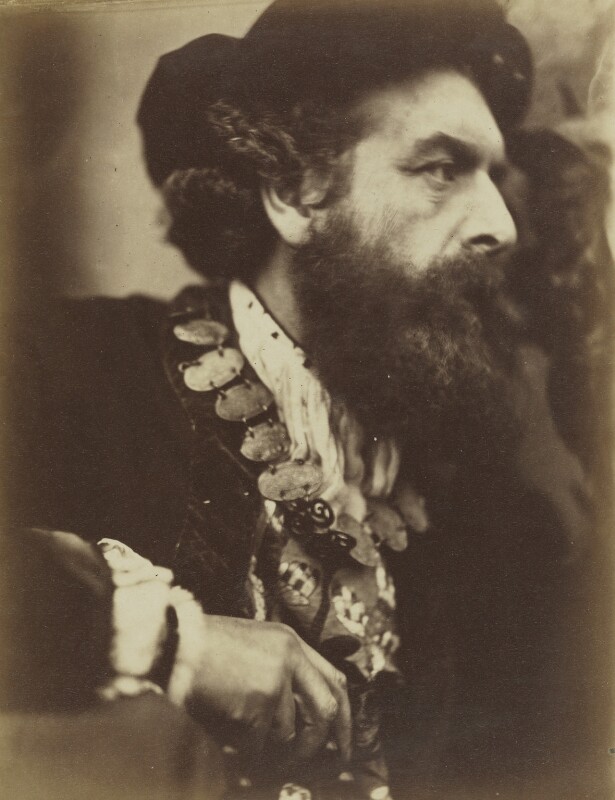 This image was created by David Wilkie Wynfield for his series of artists portrayed in historical and contemporary costume, many of which were released for sale from March 1864 under the title The Studio: A Collection of Photographic Portraits of Living Artists, taken in the style of the Old Masters, by an Amateur. Phillips appears in Part 4, entitled ‘After the Venetian School’, alongside F.R. Pickersgill, Frederick Walker and William Holman Hunt. His photograph, however, was not among those registered for copyright by Wynfield in December 1863 and was probably produced some time in 1864.

Wearing a velvet cap, lace collar and cuffs and a chain of linked discs, Phillips is portrayed in a manner evoking male portraiture by Titian, although no exact model has been identified. The costume appears the same as that in Wynfield’s portrait of Valentine Prinsep (NPG P83 and NPG P95), suggesting it came from an artist’s costume box, and perhaps indicating that the two portraits date from the same occasion. The same chain is seen in Wynfield’s portraits of G.D. Leslie and F.P. Cockerell; [1] it loosely resembles that in Daniel Mytens’ portrait of James I (NPG 109) and presumably came from a property box, too. The sharp profile seen in Phillips’s portrait was a common pose within The Studio series, as with Faed, Millais, Walker and Leslie.

Phillips and Wynfield both served as captains in the Artists’ Volunteer Corps. Early meetings to discuss the corps were held at Phillips’s studio, and he became the first to gain rank. [2]